People of Punjab with PPP now puppets will not find a place to hide Bilawal Bhutto announced emphatically. - 10bmnews Skip to content 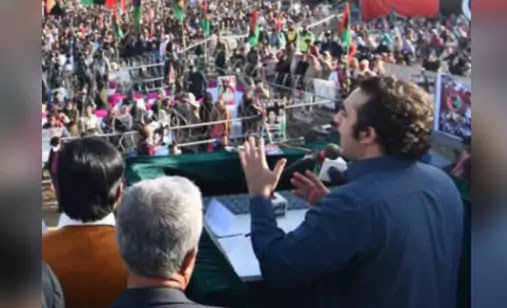 Sargodha – PPP Chairman Bilawal Bhutto Zardari has said that the people of Punjab are standing with the PPP, now there will be no place to hide this puppet, now to face the tyrant Prime Minister They have come out in the field. After declaring war on the incompetent Prime Minister, they will leave for Islamabad on February 27. How long will the common man bear the burden of Imran Khan’s incompetence?
Addressing a public meeting in the Sial Sharif area of ​​Sargodha, Bilawal Bhutto Zardari said that since the coming of this government there has been destroyed in the name of change, human and economic rights of the people are being attacked, 10 million jobs, 5 million houses have been promised.
What was done, what happened to them? The tyrants snatched the roof from the head of the poor in the name of encroachment. Apart from giving 10 million jobs, those who already had jobs were also snatched away. Ministers say there is no inflation in Pakistan, there is inflation in the country and Imran Niazi is responsible for it
Chairman PPP said that we had called them selected from the beginning, the deal with the International Monetary Fund (IMF) is a deal between the people and the poor enemy, the burden of your failure will fall on the poor people, agriculture is the backbone of our economy.
But since this failed government has come, our agriculture has been destroyed, farmers are protesting against the urea crisis, the people have been lied to about corruption but the report of Transparency has exposed the corruption of Imran Khan.
Bilawal Bhutto Zardari said that the tyrannical government will not last long despite the propaganda, how long will the common man bear the burden of Imran Khan’s incompetence? They will go out with the people of Punjab to drive away from the puppets.
After declaring war to fight the incompetent Prime Minister, they will leave for Islamabad on February 27 and after reaching there will put their demands before the government and the world.
Ga Jaila stood in front of the puppet as a wall, we have taken the country out of the crisis in every difficult time, PPP has always fought against dictatorship, we do politics to serve the people, democracy is our politics and equality is our economy. Is