Skip to content
HomeLatest NewsPDM members can make another announcement before March 23
Spread the love
After March 23, the PDM leadership is likely to have someone else. Senior journalist Rana Azeem 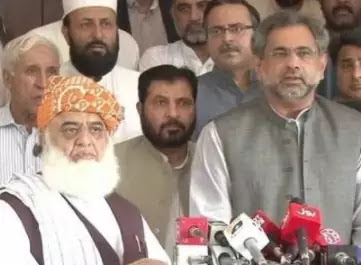 ISLAMABAD – The anti-government opposition Ittihad Pakistan Democratic Movement (PDM) has announced an anti-government inflation march on March 23. Since the announcement of PDM chief Maulana Fazlur Rehman, a new debate has started at the political level as to whether the PDM will be able to give the government a tough time after this march or the PDM. This protest of M. like other protest movements will not be able to bring any significant change.
In this regard, senior journalist and analyst Rana Azeem said that PDM is not going inside Islamabad on March 23. The four key leaders in the PDM agree that we should be given Liaquat Bagh in Rawalpindi, we will hold a meeting there and then move on. This could be another announcement from the PDM before March 23.
It is also possible that someone else is leading the PDM after March 23. Rana Azeem said that Maulana Fazlur Rehman has said that if local body elections are to be contested then PDM will be united and PDM will also play its part. However, to avoid this, it is being speculated that the PML-N will join hands with the PDM before March 23.
Earlier, the term of the long march of PDM has been changed to the inflation march. Not only that, but the head of PDM Maulana Fazlur Rehman also refrained from using the term long march. Sources also said that Nawaz Sharif also agreed with Maulana’s position and said that we should work hard to send the government home but no response has been received from other parties so far.
Maulana Fazlur Rehman is of the view that giving time to the government, again and again, gives the impression that we are the facilitators of the government but now it is time to get rid of this impression. According to a source, PDM chief Maulana Fazlur Rehman threatened to step down when PML-N president Shahbaz Sharif suggested a unanimous decision.