Skip to content
HomeLatest NewsPakistani army chief expresses regret over the death of India’s defense chief
Spread the love
The Indian Air Force has confirmed that Chief of Defense Staff General Bipin Rawat, his wife, and 11 others were killed in a helicopter crash. 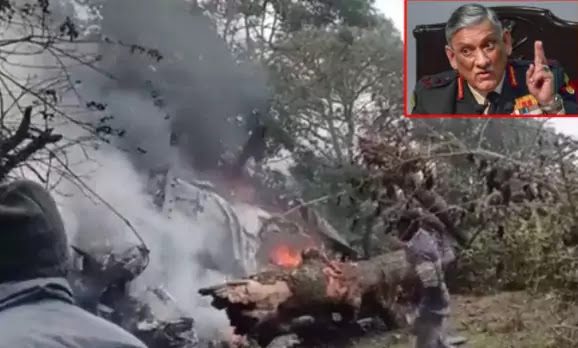 The Indian Air Force has confirmed that Chief of Defense Staff General Bipin Rawat, his wife, and 11 others were killed in the helicopter crash.
The helicopter crashed in the Kannur area of ​​the southern state of Tamil Nadu on Wednesday afternoon, but the situation was not clear regarding General Bipin Rawat. However, the Indian Air Force has now confirmed in a tweet that “we are deeply saddened to learn that General Bipin Rawat, his wife, and 11 others have been killed in the unfortunate accident.
The tweet added that Group Captain Varun Singh was injured and was being treated at a military hospital in Wellington.
The crash happened on Wednesday as the 63-year-old Chief of Defense Staff, along with his wife and 12 others, were on their way to the Defense Services Staff College on a Russian-made Mi-17V5 helicopter.

With deep regret, it has now been ascertained that Gen Bipin Rawat, Mrs Madhulika Rawat and 11 other persons on board have died in the unfortunate accident.

I am deeply anguished by the helicopter crash in Tamil Nadu in which we have lost Gen Bipin Rawat, his wife and other personnel of the Armed Forces. They served India with utmost diligence. My thoughts are with the bereaved families.

My best wishes are with the affected families he wrote. Pakistan’s Chairman Joint Chiefs of Staff Committee Nadeem Raza and Army Chief General Qamar Javed Bajwa have also expressed regret over the death of General Bipin Rawat, his wife, and others in a helicopter crash.

Earlier, speaking to an Indian TV channel, a relative of General Bipin Rawat said, “So far we have not received any final information about him (Bipin Rawat).”
General Bipin Rawat’s brother-in-law Yashwardhan Singh told Times Now that he had been summoned to Delhi by the authorities.
We used to contact ADC but they were also on the same helicopter so it is not possible to contact them he added. The Indian Air Force said in an initial statement on Twitter that General Bipin Rawat’s helicopter crashed near Kunwar in Tamil Nadu.
The statement added: An inquiry has been ordered into the cause of the accident. 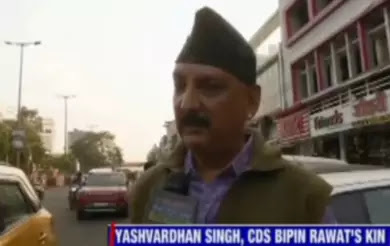 A government minister on the scene has so far confirmed that at least seven people have been killed in the crash, according to AFP.
A fire department official told AFP: There are three to four bodies at the scene but we cannot confirm their identities. Some of the injured have been shifted to hospitals he added. A senior military official told AFP that General Bipin Rawat and his wife were in a helicopter with other security officers on their way to the Defense Services Staff College.
According to the Indian news website Times Now, the helicopter had a total of 14 people on board, including the Chief of Defense Staff, his wife, defense assistant, security commandos, and an Indian Air Force pilot.
Recordings circulated on Indian news channels showed a disaster area set ablaze at the accident site in a thickly forested region close to the school in the Nilgiri locale. Some videos of the accident are also circulating on social media
Media reports said the helicopter took off from Silver Air Force Station on Wednesday evening and a few travelers were taken to a clinic for treatment.
General Bipin Rawat is India’s first Chief of Defense Staff. He was appointed to the post on December 31, 2016. The post was created by the Indian government in 2019 and is considered close to Prime Minister Narendra Modi
He belongs to a military family, many generations of whom have served in the Indian Armed Forces.
Bipin Rawat, who served for four decades, has commanded forces along the Line of Actual Control (LAC) bordering Indian-administered Kashmir and China.
General Rawat is credited with reducing the insurgency on India’s northeastern border. He has also been overseeing cross-border counter-insurgency operations in neighboring Myanmar