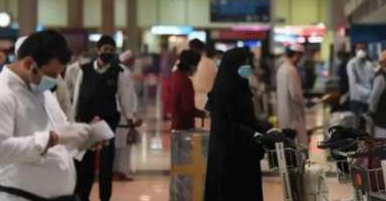 Islamabad – Concerns over the spread of a new type of Corona “Omicron”, Pakistan also imposed travel bans. According to details, Federal Minister Asad Omar has tweeted about the travel restrictions in view of the new type of corona spread.

Based on the emergence of the new covid variant, notification has been issued restrict travel from 6 south african countries and Hong Kong. The emergence of new variant makes it even more urgent to vaccinate all eligible citizens 12 years and older.

The federal minister said that a travel ban notification was issued after the introduction of a new type of Corona, with travel restricted to six South African countries, including Hong Kong. The Federal Minister also stressed the importance of vaccination of persons above 12 years of age in the country. The NCOC also issued a formal notification of travel restrictions

Due to threat of new Variant, following countries have also been included in Cat C and complete ban has been imposed on direct / indirect inbound travel from these countries with immediate effect: South Africa, Hong Kong,Mozambique, Namibia, Lesotho, Botswana pic.twitter.com/DxzqzV4sse

According to the notification, six African countries, including Hong Kong, have been included in Category C of the travel ban, meaning that direct travel of passengers from these countries has been banned.
Category C countries include South Africa, Namibia, Botswana, Eswatini, Lesotho, and Mozambique. On the other hand, the World Health Organization (WHO) has declared a new strain of coronavirus discovered in South Africa as a variant of concern. The World Health Organization (WHO) says the new strain of coronavirus could spread faster than other strains.
The statement added that preliminary evidence indicated that the new type could increase the risk of re-coding. There have been various changes in this new species, some of which are cause for concern. According to the World Health Organization, this new strain of coronavirus has emerged much faster than previous types of waves, indicating that it is moving faster.
Numerous states all throughout the planet have fixed travel limitations on nations in southern Africa since the disclosure. It should be noted that this is the 5th outbreak of the global coronavirus, which has been declared a cause for concern. Alpha, gamma, beta, and delta coronaviruses have previously been declared variants of the concern.
It may be recalled that an emergency meeting was called by the World Health Organization after the discovery of a new and dangerous strain of Coronavirus in South African countries. A statement issued after the meeting called the new Corona variety “Omicron”

The Technical Advisory Group on SARS-CoV-2 Virus Evolution met today to review what is known about the #COVID19 variant B.1.1.529.
They advised WHO that it should be designated a Variant of Concern.
WHO has named it Omicron, in line with naming protocols https://t.co/bSbVas9yds pic.twitter.com/Gev1zIt1Ek

According to foreign media reports, British experts called “Omicron” the most disturbing form of coronavirus ever.