Skip to content
HomeLatest NewsOpposition’s request to the PML-Q to leave the government alliance and not to support the election bill
Spread the love
PML-N and PPP leaders met the PML-Q delegation and agreed to continue talks for cooperation. Sources 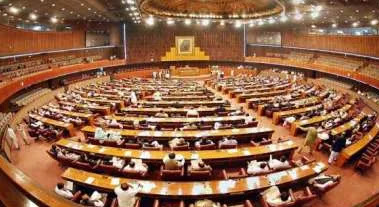 ISLAMABAD – Opposition parties have requested the Pakistan Muslim League-Q (PML-Q) to secede from the ruling coalition. Insisted, the PML-Q leadership and the opposition agreed to continue talks. According to sources, other opposition leaders including PML-N and PPP Khawaja Saad Rafique, Khurshid Shah and Shahida Akhtar Ali, and others called on the PML-Q delegation.
Opposition leaders urged the PML-Q leadership not to support the electoral reform bill. The opposition also demanded from the PML-Q that the PML-Q should secede from the ruling coalition. It has been reported that PML-Q refused to support the electoral reform bill without consulting the party.
The two sides agreed to continue talks for cooperation.
It may be mentioned here that the central leader of PML-Q and Federal Minister Tariq Bashir Cheema while talking to a private TV channel said that PML-Q is a coalition party of the government and discussed all issues including EVM with the Prime Minister. To consult us which has not happened till date. I have been the Federal Minister for 3 years. The Prime Minister does not consult. The Prime Minister also consults other ministers but why not us? PML-Q leader said that political parties are met only in the assembly, we did not have any meeting with PML-N, Monis Elahi met Bilawal Bhutto on water-related issues, or he met Khurshid Shah yesterday That he has been released from prison.
If the government falls, we will also fall because we are allies. Tariq Bashir Cheema has not opposed a single bill of the government to date. A meeting of CEC will be convened on this too in which consultation will be held. The meeting will also consult on all issues including EVM. “Elections are approaching. We also have to make political decisions. We want to give relief to the people because elections are near,” he said