Skip to content
Home Latest News Opposition leader Shahbaz Sharif’s offer to support the government in the IMF program
The government will support the IMF program by introducing a new amendment bill by abolishing taxes in the money budget, yet if they do not see poverty and misery, the people will teach a lesson in the next election. Speech in the National Assembly 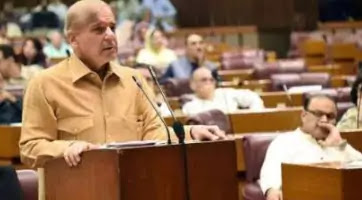 ISLAMABAD – Opposition has offered to support the government in the IMF program, PML-N President and Leader of the Opposition Mian Shahbaz Sharif has said. We will support the IMF program with the amendment bill, yet if they do not see poverty and misery, the people will learn a lesson in the next election.
Speaking in the National Assembly, he said that Pakistan is now ranked third in the world in terms of inflation. The sovereignty of the country will be shaken, there is no one to ask or explain to them, our GDP was 5.8 in 2012, millions of people got jobs, load shedding from the country ended during the N-League era, at that time unemployment Increased, they do not like to talk about the state of Madinah, in our time inflation was at the lowest level in 47 years at 2.3%, after 1952 during his time our GDP went negative, they used to claim our They have hundreds of experts, they have drowned the country’s economy.
Shahbaz Sharif said that in the present government it has become difficult to provide loans and meet the needs of defense, these people have become a security risk for the country. Shahbaz Sharif said that they have imposed a tax on bakery, eggs, red chilies, and infant milk. This is an economic massacre of our poor people. Machinery imported to charitable hospitals has also been taxed. I myself am a cancer patient, I have been treated.
Opposition leader Shahbaz Sharif said that where can a poor man get treatment for cancer? They also drowned the fleet of agriculture, billions of rupees were wasted in LNG too. If the House does not follow the farmer then they will not forgive us. She will come to the streets and hold them accountable.
Shahbaz Sharif said that the government should take back all the cruel measures, bring this second bill will help in making the IMF program successful, if these taxes are not taken back then we will condemn it in the streets along with the house, Pakistan When it was about to become a nuclear power, the United States offered 5 billion to Nawaz Sharif.
He said that a few weeks ago the zealous people of Khyber Pakhtunkhwa told him that there is inflation, this is the same Khyber Pakhtunkhwa where they did not see poverty or poverty if they do not see poverty and poverty, the people in the next election PT. I will not see, people will teach them a lesson in the next election, they do not see the poor and poverty