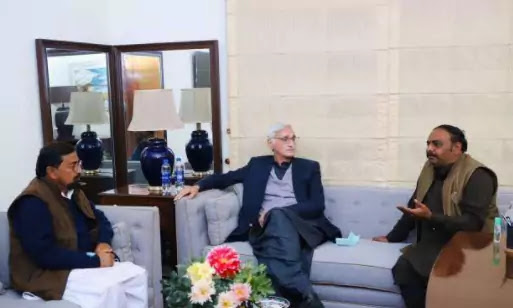 Lahore – Tareen group also mobilized on the no-confidence motion of the opposition parties, the political situation before the PDM meeting was an important meeting, Will respond to it.
According to sources, before the meeting of the PDM parties, an important meeting of the Tareen group was held in Model Town, in which the leaders of the Tareen group discussed in detail the claims of the opposition no-confidence motion and the political situation.
It has been reported that in the important meeting, the members of the Tareen group agreed that whatever decision Jahangir Tareen would take regarding the no-confidence motion, he would respond to it. On the other hand, according to sources, special representatives of PML-N President Shahbaz Sharif and Jahangir Tareen have been contacted.
Sources said that Shahbaz Sharif is likely to contact Jahangir Tareen in the next few days and also Shahbaz Sharif is likely to meet Jahangir Tareen in the next few days.
It may be recalled that the PML-N had contacted the PML-Q in the ruling coalition yesterday and a meeting between Shahbaz Sharif and Chaudhry brothers is likely to be held soon.
Speaking to the media further, PML-N leader Muftah Ismail said that a no-confidence motion would be filed before the long march. Imran Khan has lost his confidence and will lose it in the National Assembly when he finds out his number. When Shahbaz Sharif spoke to the ruling party MQM, he did not refuse our suggestions.
Muftah Ismail said that people no longer want to bear the burden of Imran Khan or inflation, now the people of Punjab also do not want to bear the burden of mismanagement of Bazdar, twenty to twenty-two people want to talk to us.
He said that no one will be able to fight in Faisalabad on the PTI ticket now. Faisal Wada had earlier given false testimony. This case had been going on in the Election Commission for three years now, the judiciary should deal with Faisal Wada’s case.