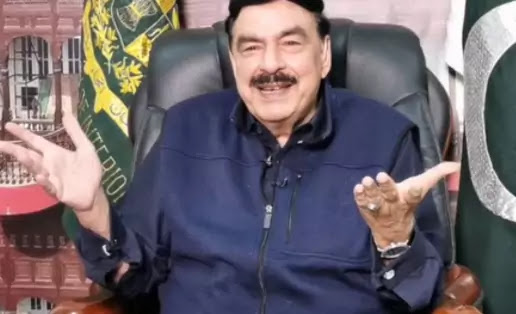 ISLAMABAD – Federal Interior Minister Sheikh Rashid has said that if the opposition comes on March 23, they will return with their mouths shut. On March 23, there will be foreign ministers of more than 100 countries. Services and roads will be closed, more than half of the roads will be with the army, Imran Khan is 110% correct that if removed they would be more dangerous Has kept the media busy for eight days by saying one sentence
According to private TV, Sheikh Rashid, while responding to the inflation march of the Pakistan Democratic Movement (PDM) towards Islamabad on March 23, said that these people should fulfill their stubbornness, the loss will be theirs, we ensure the rule of law.
We will make it, PDM is at a disadvantage, we will take action after seeing their behavior, our job was to convince them to complete this stubbornness, failure will be the fate of PDM, the nation knows how important March 23 is. Is the day? It is our responsibility to ensure the security of foreign guests.
Rejecting the impression of a behind-the-scenes deal, the Federal Minister said that there is no such thing as being behind the scenes. We will fulfill our responsibility by abiding by the law
Replying to a question, the Federal Interior Minister said that Nawaz Sharif has appointed five army chiefs and judo karate from five, they have no scope, Imran Khan is the best choice, Maulana Fazlur Rehman’s time of selection is strange, less than two years What will you do? Institutional opinion has been formed, it has been exposed, they know that Imran Khan wants to take the country out of the crisis, inflation is a big problem at the moment, Imran Khan thinks that after Ramadan inflation will be controlled. I had no connection with Punjab Chief Minister Usman Bazdar before but when I found out that he will be the Chief Minister then I also have to work, I have taken three universities from him.
In reply to another question, Sheikh Rashid said that the Federal Investigation Agency (FIA) was with me while Shahzad Akbar was looking into the cases of accountability. Talks with Tehreek-e-Taliban Pakistan (TTP) have come to an end, border fencing is at a standstill, 20 km fencing remains I included civilians and soldiers