Skip to content
Home Latest News Nothing will happen from the sit-in long march. 15 people from inside are with Imran Khan Sheikh Rashid Ahmed
Those who talk of no-confidence should know that slaves have to be brought in. I said the finance bill will be passed by the senate. Home Minister talks to media 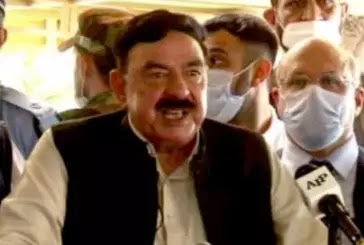 ISLAMABAD – Federal Interior Minister Sheikh Rashid Ahmed has said that there will be no sit-in or long march, adding that 15 people from inside are with Imran Khan. According to details, while talking to media representatives, he said that those who talk of no-confidence should know that slaves have to be brought, the opposition is not doing anything against the government, Bilawal Zardari came on February 27, the rest also came on March 23.
If Fazlur Rehman is also interested in coming, then come, sit-in and nothing will happen in the long march, the Prime Minister has said that 3 months are important, PTI will play a full role in the local body elections, said the Prime Minister in the federal cabinet meeting. No one talked about the presidential system and the emergency.
Sheikh Rashid said that we have to go to the IMF, we have gone to the IMF 23 times and China has no objection to our going to the IMF, Pakistan’s relations with the United States and China will be on equivalent balance. China is our friend of all seasons. The Prime Minister is leaving for China on February 3. The IMF will lose its life when our economy is strong. The visit to China will bring progress on future issues.
The United States is a power, we have to have relations with the United States, we can’t make anyone angry to please anyone, we know the growing economic situation in Afghanistan, the whole world needs to help Afghanistan,” he said. Should He said that they were reviewing the law and order situation, adding that terrorism was on the rise in Balochistan.