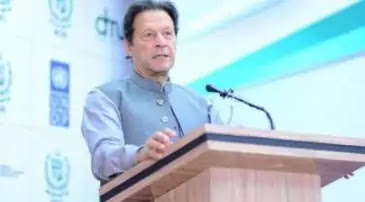 ISLAMABAD – Prime Minister Imran Khan has said that he does not want to be the Prime Minister but wants to make Pakistan a great country by becoming the Prime Minister. I consider the war against corruption as jihad. Yes, the war against the mafia and for the rule of law is the war of Pakistan’s future.
Addressing the inaugural function of the 14th International Chambers, he said that they were working to set up an expositor in Rawalpindi. The Ring Road would have been enough by now but we had to change it due to dishonesty and corruption which led to delay.
It has reached the final stage, along with the creation of industrial zones, it has been decided that land is expensive for industry and becomes a mark of real estate, it has been decided to lease the land so that Cheap land can be given to the industry.
We have held a meeting of economic zones, we have set up industries but we have not paid attention to how we will supply electricity there.
Our fight is to establish a rule of law, rule of law does not come in one day, fight against mafias is the future war of Pakistan I consider the war against corruption as jihad. I have no desire to be the Prime Minister. I want to make Pakistan a great country by becoming the Prime Minister. Those who spread chaos every day have nothing to do with the rule of law.
No government has had as many challenges as our government. If China, Saudi Arabia, UAE had not helped, we would have gone bankrupt. Imran Khan said that what was the state of Madinah? I want to clear people, people listen to the state of Madinah only in Friday prayers, I want it to be included in people’s lives, I had a great revolution in the state, was a successful model of world history.
It takes time to establish the rule of law in Pakistan, there are mafias who do not want to come under the law, this is the war of Pakistan’s future, this is the war we all have to fight, save our people and economy during Corona We had to make very difficult decisions during Corona. The choices we made during Corona are being made by England today. Are in trouble
He said that inflation is all over the world at present, Pakistan is still cheaper than other countries, the dollar went to Afghanistan due to pressure on the rupee, our exports increased historically, our tax revenue also increased, Rs 6,000 billion. Collected more than taxes, Pakistan’s exports are at a historic level, the highest remittances in the country’s history, the incompetent government saved from unemployment, saved from Corona, saved the economy, IT exports increased by 70%, Sales of cars and motorcycles have increased, exports and taxes are very important for the future of Pakistan, no effort has been made in the past to increase exports, they say our government is incompetent, the same government that brought the country out of the crisis, Pakistanis pay the lowest taxes in the world, in the past people did not trust FBR, tax culture could not develop in our country, there is a need to promote tax culture in the country, in the past the people’s tax money was not spent on them.
No one has tried for universal health insurance in the past, every family in all provinces except Sindh has health insurance, health insurance can provide free treatment up to Rs 1 million, health care is actually a health system.