Noor Muqaddam murder case; Apparently Jaffar is not an American citizen, he is a Pakistani and he also knows Urdu - 10bmnews Skip to content
People like Zahir Jafar consider themselves powerful and think that no matter what they do, they will escape easily. Zahir Haider, a close friend of Zahir Jaffer and Noor Muqaddam 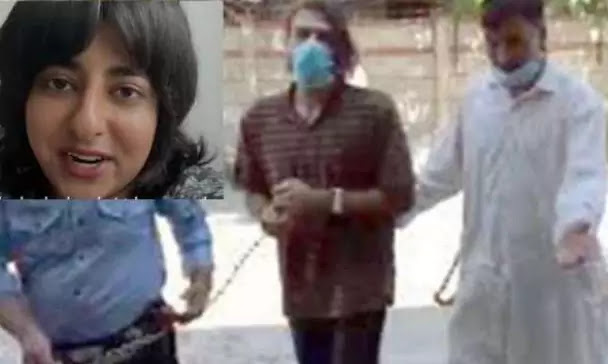 Islamabad – Talking about Zahir Jaffer, accused in the Noor Muqaddam murder case, Zahra Haider, a close friend of Noor Muqaddam said that people like Zahir Jaffer consider themselves powerful and they think so. Whatever they do, they will easily escape, this is obviously the thinking of Jafar too. Zahra Haider said that Zahir Jaffer is trying to show that he does not speak Urdu, although as far as I know Zahir has spent his whole life in Pakistan, Zahir Jaffar has only completed his Indo graduate degree for one year. He went to the United States, but he pretended not to know Urdu.
Zahir Jaffar says that he is an American citizen and not a Pakistani, although he is a Pakistani and of course he knows Urdu.
He is saying this because he is sure that he will escape. Zahra Haider said that we have known each other since childhood but I did not have much friendship with Zahir Jaffar because Zahir Jaffar is an introverted type person, I felt that he gets angry very quickly and That’s why I kept my distance and didn’t try to be friends.
Zahra Haider said that Zahir studied at the International School of Islamabad which is an American school. All the boys around Zahir and the people he sat in the company of were very feminine and gossipy I can say all this because they talked about me and my mother he said. I still remember what he said.
I think these people were the dirtiest people living in Islamabad at that time he said. I don’t have any conversations with them now, so I can’t say whether they have changed or whether they have improved their behavior. Zahra Haider said that I also shared screenshots of a conversation with Zahir Jaffer on Facebook seven to eight years ago in which Zahir sexually harassed and threatened me.
Seven, eight years ago, we heard that Zahir Jafar had been diagnosed with schizophrenia. This is exactly what happened when Zahir texted me on Facebook. Not only me but others were also affected. Unfortunately, we all called this behavior normal on the part of Zahir and said that because he is suffering from this mental condition, he is doing all this.
One of my relatives is suffering from schizophrenia and I know many people who have a mental illness he said. Having a mental illness does not mean that you kill someone so brutally or that you harass or threaten someone. It is not a disease but a psychological problem. Zahir Jaffar must have gone to America, and as far as I remember Zahir Jaffar went to America and used some drugs which aggravated his mental illness, in view of which Zahir Jaffar’s parents brought him back to Pakistan.
On his return to Pakistan, Zahir Jaffer was sent to a rehabilitation center where he underwent therapy for a psychiatric condition. Zahir Jaffer also did a course of therapy works. According to Zahra Haider, Zahir Jaffer did not spend much time with women, I do not remember exactly but a few years ago Zahir Jaffar had an affair with a girl. I have never spoken to the girl directly, but I have learned from some people that the relationship between Zahir Jaffer and the girl was not very good, and there were reports of mental stress and physical violence,” he said.
Unfortunately, I do not know much about this, but I do know that the girl was physically and mentally abused. Regarding Noor Muqaddam, Zahra Haider said that she became friends with Noor when we were a little older. Noor grew up not in Pakistan but in Dublin, Ireland because now as everyone knows that her father was a diplomat, Noor came to Pakistan. When she was older, she had a beautiful Irish accent that I loved.
We had a great time, Noor and I used to visit each other’s house. We also went for a swim together, standing on the roof of Noor’s house in the Diplomatic Enclave for a long time. According to Zahra Haider, Noor Muqaddam had a delicate and humble personality. As far as I remember, Noor Muqaddam wanted to be a vet because he was very attached to animals, he said
Read more: Noor Muqaddam murder case, accused Zahir Jaffer pleaded guilty