Skip to content
HomeBreaking newsNever speak against the army this country needs an army more than Imran Khan
If it were not for this army, this country would have been divided into three parts. We should talk about strengthening the army, Imran Khan talked to the workers and people on social media. 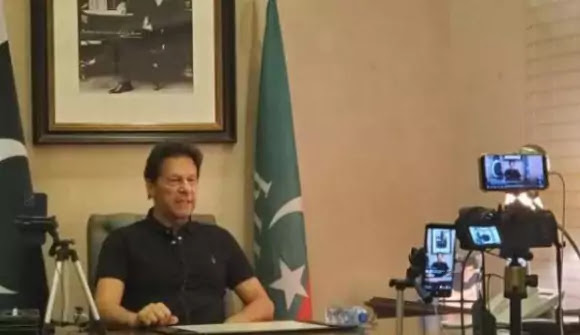 Islamabad – Imran Khan says never to speak against the army, this country needs more army than Imran Khan. According to details, former Prime Minister Imran Khan is talking to workers and people through video calls on social media.
Meanwhile, Imran Khan in his message said that never speak against the army, this country needs more army than Imran Khan, if it were not for the army would have been divided into three parts, if not the army. If so, the country should not stay, we should talk about strengthening the army.
Imran Khan accused Asif Zardari and Nawaz Sharif of trying to weaken the army in their government. Asif Zardari was saying in the memo gate that saves us from the army.
Imran Khan said that it was an insult to 220 million people that the government should be brought from outside and put on their heads. If we say that beggars are no showers, they will always crawl like ants.
Referring to his political mistakes, Imran Khan said, We will fight elections for the first time considering the science of contesting elections. We understand what to do when it comes to government.
We will come fully prepared, this time we will fight the elections by fully preparing the youth. People who were walking with us thought they would benefit their business he added.
This is what happens in Pakistan and when we tried to stop them, we faced problems, when we tried to establish the rule of law, they showed themselves. Earlier, Pakistan Tehreek-e-Insaf (PTI) chairman and former prime minister Imran Khan, while addressing a meeting of the central leadership on Wednesday, said that Pakistan stood at the most important stage and place in its history. The conspiracy and the attack on sovereignty are under scrutiny.
Imran Khan said that he knows his kin, the country isn’t prepared to think twice about opportunity and sway, denying individuals of future decisions is unimaginable for long not by setting up unnatural imported governments but through transparent elections.
Giving the right to decide the future to Pakistan will go ahead. He said that the administration should avoid the folly of creating obstacles in the meeting, it is not possible to imprison the sea of ​​people, and tomorrow’s gathering of Minar-e-Pakistan will make history.