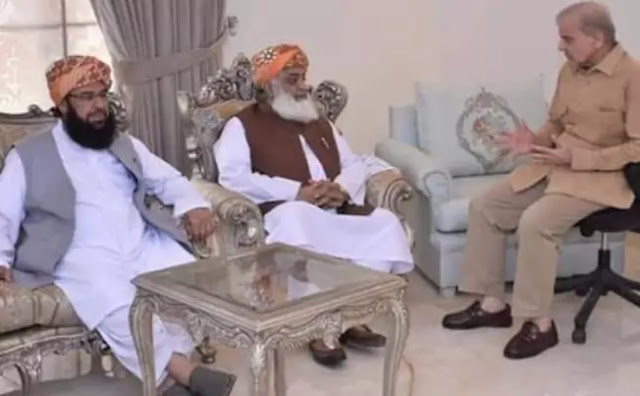 Taxila – Central General Secretary of Jamiat Ulema-e-Islam (JUI-F) and former Deputy Chairman Senate Abdul Ghafoor Haideri have said that Shahbaz Sharif should make it clear that there is no resistance or reconciliation in the formation of the national government. M) or PML-N, the day before yesterday he said in Karachi that he will march towards Islamabad, now we have to ask him if that statement was correct or not? We are ready to tolerate the Imraniya government for a moment. No, the present government has completely failed on all fronts. The three-year tenure of Pakistan Tehreek-e-Insaf (PTI) was based on lies. PTI is a bunch of playwrights. In front of them, a pair of hands and knees greet the Afghan people and the Taliban
Talking to the media, Maulana Abdul Ghafoor Haideri said that Pakistan, which has undergone major changes in recent times, has a great opportunity to establish good relations but the rulers are only making statements, no strategy is being formulated. “The Afghan nation and the Taliban have fought NATO forces for 20 years, defeating three world powers in a row, before British imperialism, superpower Russia, and now the United States and NATO forces,” he said. Pay tribute
Maulana Abdul Ghafoor Haideri said that America was not easily known, in 20 years of war America did not achieve any goal but more than two thousand of its soldiers were killed, America accepted all the demands of the Taliban one by one. The last evacuation took place in the dark of night when everyone was asleep, they were fleeing. He said that in the current situation, no country should interfere in the formation of the Afghan government, leaving them to make their own decisions. Yes, if the Taliban go along with all the stakeholders, it will be of great benefit to them in the future