Skip to content
HomeLatest NewsNawaz Sharif is 100% ready for a compromise
Spread the love
Nawaz Sharif says do not arrest and withdraw cases, he has also told his brother that I do not want to see you Prime Minister. Senior journalist Haroon Al-Rasheed claims. 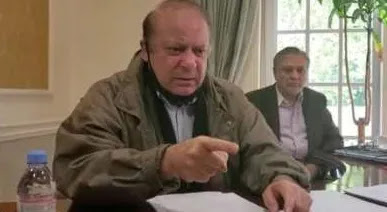 Lahore – Senior Journalist Haroon Al-Rasheed says that Nawaz Sharif is 100% ready for a compromise. Not direct but said that I do not want. Asif Zardari met those with whom he had met. One news is that Asif Zardari is keeping a close eye on Balochistan to join us and give us. Give
Haroon Al-Rasheed further said that Nawaz Sharif is 100% ready to compromise. He says do not arrest and withdraw the cases. He is strongly opposed to EVM. To a question, he said, I don’t think there is a joint meeting.
If it happens, it means that the situation is fine, talks have taken place. Haroon Al-Rasheed has claimed that the establishment is not in favor of electronic voting machines. They say that there is a tribal society, people are not educated. Wealthy people can buy votes. There should be some limits. The electronic voting machine also needs 25 billion rupees, it will be a risk.
He further said that this is one of the reasons why the PML-Q and MQM have suddenly declared a coup d’etat. Was Members of Parliament were given lunch under the chairmanship of Prime Minister Imran Khan. Coalition party members also attended the luncheon. Prime Minister Imran Khan addressed the function, in which the coalition parties had expressed serious concerns over the electronic voting machine.