Skip to content
HomeLatest NewsNawaz Sharif has the support of 2 Islamic countries
The question of Nawaz Sharif’s return does not arise, however, Bahrain and Qatar are making great efforts. Senior journalist Haroon Al-Rasheed claims 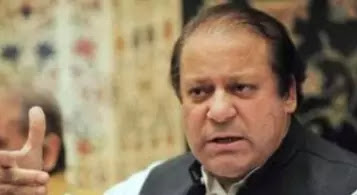 ISLAMABAD – Former Prime Minister Nawaz Sharif has the support of two Islamic countries which are trying to bring him back. Senior journalist Haroon Al-Rasheed has said that Nawaz Sharif The question of his return does not arise, however, Bahrain and Qatar are making great efforts. There are no signs that Imran Khan is leaving.
He further said that the four men of PML-N mentioned by Fawad Chaudhry, I do not know who they are, are rhetoric for political pressure. In addition, Federal Minister for Energy Hamad Azhar has revealed that there are 4 members in PML-N who consider themselves more qualified than the Sharif family.
In a statement released on the social networking site Twitter, he said that on the one hand, it is a good thing that there are four members in the Noon League who consider themselves more qualified and entitled to lead than the Sharif family. Have the courage
Federal Minister for Energy Hamad Azhar advised the PML-N members that they should express this commitment not in closed rooms but in public. On the other hand, PML-N President and Leader of the Opposition in the National Assembly Shahbaz Sharif has declared himself a nightmare for Prime Minister Imran Khan.
Talking to media in Lahore, reacting to the increase in prices of petroleum products, he said that Imran Niazi has only increased the prices for three and a half years. The people’s pockets have been robbed by increasing the prices of Rs. And the result of corruption