Skip to content
HomeLatest NewsNAB can’t tease us if teased we will have food in our mouths Fazlur Rehman
Spread the love
No matter what is imposed on us, running the economy has become a challenge. Head PDM 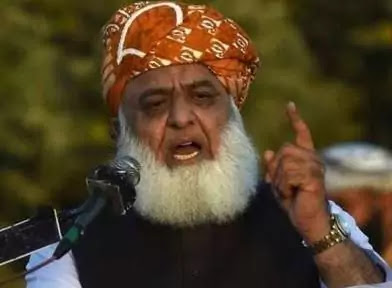 Larkana – Pakistan Democratic Movement chief Maulana Fazlur Rehman has said that the NAB can not tease us if teased will be a mouthful. According to details, while addressing a conference in Larkana, he said that the challenge of drowning the fleet of the country’s economy is who will fix the issues, it has no value to those who have been imposed on us, say 10 million jobs. The youth have been deceived, now it has become a challenge to run the economy.
The PDM chief said that today the parliament is hostage, through which the government is enacting legislation for rigging the elections. He said that we are victorious, the rulers are defeated, we have to recognize Islam and Sharia.
Maulana Fazlur Rehman said that Pakistan is a state on the map of the world, but today Pakistan’s independence is being snatched away.
The Pakistan Democratic Movement (PDM), on the other hand, is reluctant to resume its protest movement as it marches to the federal capital, according to a media report. They want a decisive attack but their other comrades are not at all impressed with the idea which has disappointed Maulana Fazlur Rehman. This may be the reason why Maulana Fazlur Rehman has started considering leaving the post of PDM leader. There are only 9 parties