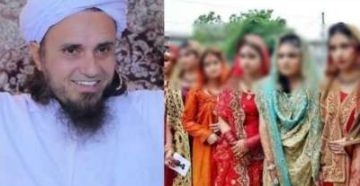 Lahore – Mufti Tariq Masood in a recent statement offered to marry four divorced women in exchange for marrying three divorced women whose video on social media. Going viral. According to the details, Mufti Tariq Masood in his statement said that you people should have four marriages, and the first three should be done with divorced or widowed women, after which I will get you married to a virgin girl in your fourth marriage.
In the video, he said, I promise that whoever marries three widows, his fourth marriage is my responsibility. If I do not get his fourth marriage with a virgin, then change my name.” Mufti Tariq Masood jokingly said that if a 16-year-old girl is not found then two eight-year-old girls, otherwise four girls four years old.
As soon as he said this, Mufti Tariq Masood smiled and the audience also laughed instead of expressing their regret.
You can also watch this video