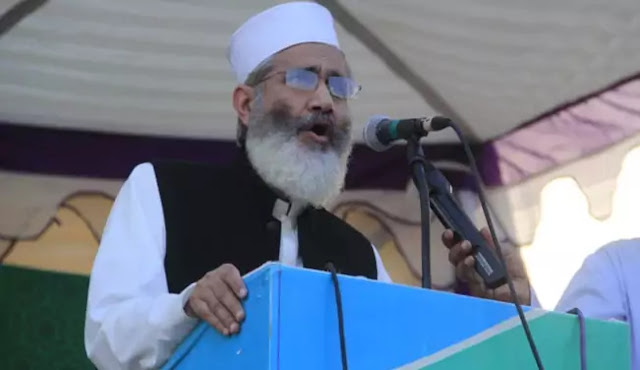 Ameer of Jamaat-e-Islami Pakistan Siraj-ul-Haq has rejected the government’s mini-budget and said that he declares war on corrupt rulers.
Addressing a rally in Islamabad, Siraj-ul-Haq said that Prime Minister Imran Khan’s famous statement was that there is no need to panic, peace is only in the grave.
He said that the new year in the world is starting with good news and bad news in Pakistan, the effects of the money budget will be more dangerous than corona, dengue, and smog.
Amir Jamaat-e-Islami further said that the country is now a breeding ground for national and international mafias, the government has handed over the SBP to the International Monetary Fund (IMF).
He said that the planning for the SBP of Pakistan is given by the IMF, the governor of SBP should be sent back to Egypt and his resignation should be taken from him.
Siraj-ul-Haq also said that Prime Minister Imran Khan said that 7 million people are addicted to drugs, Pakistan is free and independent, which will be decided only by the people of Pakistan.
He said that the government of Pakistan handed over Kashmir to India. Two and a half hundred years later, the state of Kashmir came to an end under PTI.
Amir Jamaat-e-Islami said that the whole world acknowledges that the system of the West has destroyed the world, thanks to this system the world is trapped in a few hands.
He said that only a few people benefit from the hard work of the people, hard work and people do it and the bank account of some other people grows. Siraj-ul-Haq said that 36 thousand megawatts of electricity are generated in Pakistan.
I ask why the mosque bills are increased he said. Why is the television fee included in mosque bills? Doesn’t the corrupt government know that television is not watched in the mosque?
Ameer Jamaat-e-Islami said that the Prime Minister himself says that if the prices go up then the Prime Minister is a thief. Imran Khan had burnt the bill while standing on D-Chowk.