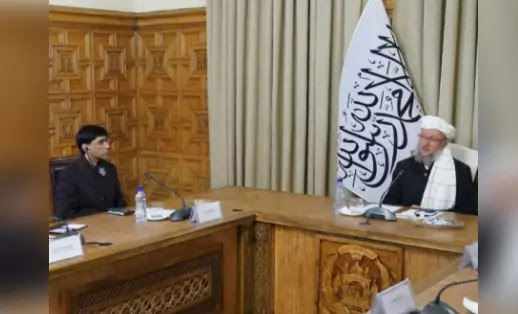 KABUL – National Security Adviser Moeed Yousuf has met with key leaders of the Afghan government. The purpose of Moeed Yousuf’s visit is to strengthen human and economic relations with the new rulers of Afghanistan. Encouraging them to invest in
Afghanistan’s energy, mining, and agriculture sectors, the Islamic Emirate’s policy are clear that it will not allow its territory to be used against anyone, while the National Security Adviser said Pakistan is with the Afghan people. And will continue its cooperation in every field, Pakistan is ready to implement regional projects
According to details, Special Assistant to Prime Minister Imran Khan for National Security Moeed Yousuf met with Second Deputy Prime Minister of Afghanistan Mullah Abdul Salam Hanafi and Foreign Minister Maulvi Amir Khan Muttaqi during his visit to Kabul.
The meeting was also attended by Pakistan’s Special Representative for Afghanistan, the Afghan Minister for Industry and Trade, and representatives of the Chamber of Commerce. Arrivals were also reviewed
On the occasion, the Afghan Deputy Prime Minister said that Pakistan and Afghanistan are neighboring and brotherly Islamic countries, which have many historical, religious, and fraternal commonalities, and hoped that this relationship would last forever.
But thanked Pakistan. He said that he wanted a mutually respectful relationship with every country in the region, including Pakistan, which would lead to expansion in the areas of trade and transit.
Stressing on the speedy completion of the project, he said that the policy of the Islamic Emirate was clear that it would not allow its territory to be used against anyone and this is what everyone would expect. Afghan Deputy Prime Minister Invest in energy, mining, and agriculture
On the occasion, Special Assistant for National Security Affairs Moeed Yousuf said that Pakistan stands with the Afghan people and will continue its cooperation in all fields.
Without deepening economic ties, there will be no peace and stability in the region. Expansion of transit sectors is important.
Moeed Yousuf said that Pakistan is ready for the implementation of regional projects. Earlier, Moeed Yousuf had met Afghan Foreign Minister Amir Khan Mottaki. According to Pakistani Ambassador to Kabul Mansoor Ahmad Khan, Moeed Yousuf’s meeting with the Afghan Foreign Minister was fruitful