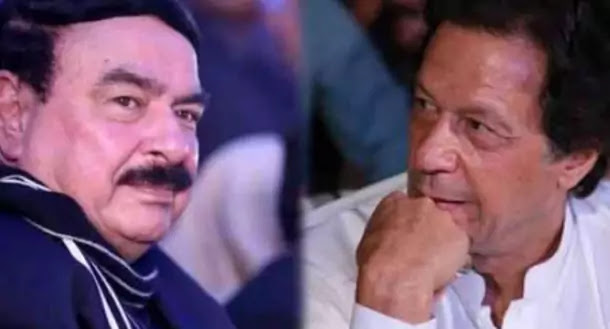 Attock – After Faisalabad, a case was registered against Imran Khan and others in Attock on the charge of the Masjid Nabavi incident. According to details, a new case has been registered at Attock Airport Police Station in which Fawad Chaudhry, Qasim Suri, Murad Saeed, Sheikh Rashid, and many others have been named along with Imran Khan.
Earlier, a case has been registered against 150 persons including PTI Chairman Imran Khan, Sheikh Rashid, Fawad Chaudhry, Shahbaz Gill, Qasim Suri, Anil Mussarat, and Sahibzada Jahangir in Faisalabad over the incident that took place in Masjid-e-Nabawi. In the case registered in me, 4 sections have been imposed including the section of blasphemy.
On the other hand, Sheikh Rashid Shafiq, nephew of former Interior Minister Sheikh Rashid Ahmed, was taken into custody on arrival in Islamabad from Saudi Arabia. He was stopped and detained by plainclothes men along with IA immigration staff, after which plainclothes men took him into custody and left the airport.
Meanwhile, Federal Interior Minister Rana Sanaullah Khan said on the incident that took place in Masjid-e-Nabawi that the incident was planned in Pakistan. The statements are in front of everyone, whose nephew Rashid Shafiq gathered regular people, and he also invited a gang from Britain, the command of the gang was Prince Jahangir and Anil Musarat.
He said that what Imran Khan has been saying, the statements of Fawad Chaudhry, Shahbaz Gul, and Sheikh Rashid are in front of everyone, some people were sent to Saudi Arabia from hereunder planning They are preventing him from praying