Skip to content
HomeLatest NewsMaryam Nawaz’s alleged audio message is actually WhatsApp audio message which is also leaked by PML-N.
Spread the love
Maryam Nawaz scolded a leader since then she is angry and audio is leaking 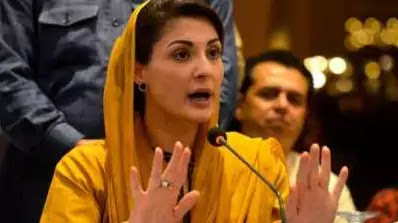 Lahore – In the last few days, various audio messages of PML-N leader Maryam Nawaz have been leaked in which she sometimes talks about advertisements and sometimes talks about the owners of big channels.
Maryam Nawaz’s alleged leaked message is actually an audio message sent on WhatsApp which she has been sending to a leader of her own party. It is said that Maryam Nawaz had slapped a leader close to her in front of everyone, after which she had to face a lot of embarrassment.
Maryam Nawaz shared all the issues with this person, including the instructions given to the social media team and the planning for the whole day. When a close person gave his advice to Maryam Nawaz in a private meeting, Maryam Nawaz scolded him, after which the person remained silent and faced a lot of embarrassment.
However, they started chatting on Maryam Nawaz’s WhatsApp first and then leaking audio messages.
Maryam Nawaz’s meetings and planning with her close leaders also started leaking which reached a big personality of another country.
Maryam Nawaz has been sending this message to more than one person, due to which she could not trace the leader who is behind it and Maryam Nawar is not giving a strong impression on her as she has many more audios and There are also videos of this person who will get into more trouble after coming out.
However, they have told these leaders that I have found out who made this move and I am silent and I want to give them more opportunities to come and talk to me, or else I will be tough again. Will