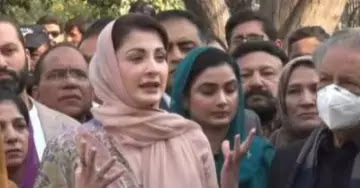 Lahore – PML-N Vice President Maryam Nawaz shared the truck art created in memory of father Nawaz Sharif on social media on which Seraiki song. Maryam Nawaz shared a truck art on Twitter and sent a message to her father while capturing the words of a Seraiki song as a caption.
In the picture, slogans of Nawaz Sharif Zinda Bad can be seen on the truck art and at the same time, the Seraiki song ‘Pachhan Marwe Dhola Teri Lod Pe Gayi’ is engraved in the craftsmanship made on the truck. Maryam Nawaz also recorded the same song in the tweet The Urdu meaning of is to come back, now your need has arisen.
It should be noted that in the song, singer Tahir Nayyar has awakened the magic of his voice which is very viral on social media.
The author of this melody is Akram Rahi while the verses are composed by Qaiser Tarar. A picture of a rickshaw was shared on which a citizen wrote that Nawaz Sharif is remembered, we need old Pakistan