Skip to content
HomeLatest NewsMaryam Nawaz reacted to the news of giving the most expensive car to Junaid Safdar at the wedding
Spread the love
This lie is spread on social media, it is disappointing that fake news is being spread in big-name accounts without confirmation. PML-N vice president denies reports of giving Rs. 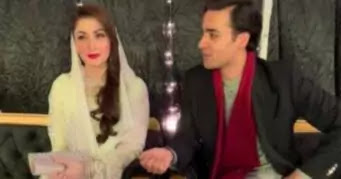 LAHORE – Former Prime Minister Nawaz Sharif’s daughter Maryam Nawaz has denied reports of giving her son an expensive car at her wedding. According to which he gave the most expensive car to his son Junaid Safdar at the wedding.
It was said on social media that Maryam Nawaz gave his son a Mercedes car worth Rs. 14 crores as a gift at the wedding which is the most expensive car registered in Punjab.
The PML-N leader dismissed the reports in a Twitter message. He wrote that the lie was spread on social media, it was disappointing that fake news was being spread in big-name accounts without confirmation.
Maryam Nawaz expressed anger over false news platforms

This blatant lie is all over social media. It is disappointing how reputed accounts propagate fake news without verification. pic.twitter.com/C6hYnelhGJ

It may be recalled that Junaid Safdar had tied the knot on December 14 with Ayesha Saif Khan, daughter of former Chairman Accountability Bureau Saif-ur-Rehman Khan.
Junaid Safdar and Ayesha Saif Khan were married in August 2021 in London. The main wedding ceremonies of the two were attended by important leaders of Pakistan Muslim League-Nawaz (PML-N) including Shahbaz Sharif, besides other political, social, and showbiz personalities.
After the marriage of Junaid Safdar, the news came out that he will soon enter the political arena. Pakistan Muslim League-Nawaz (PML-N) leader Capt. (Retd) Safdar had said about his son’s involvement in politics that Junaid Safdar will also contest elections after completing his education.