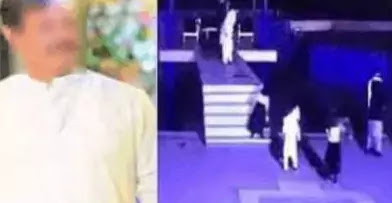 Sheikhupura – Pakistan Muslim League-N leader Malik Zaheer died in a swimming pool in Ferozwala Tehsil of Sheikhupura. According to details, a very tragic incident has taken place in Sheikhupura.
The invitation of the PML-N leader’s brother turned into mourning and in Ferozwala, Union Council Chairman PML-N leader Malik Zaheer fell into the swimming pool while talking on his mobile phone and lost his life.
According to eyewitnesses, the invitation of Malik Zaheer’s younger brother was going on at a farmhouse where a swimming pool was also built and it was empty. He also tried to provide medical aid but had already died. Happiness turned to mourn after the tragic incident and the invitation turned to mourn
Read more: League leader dies after falling into a swimming pool