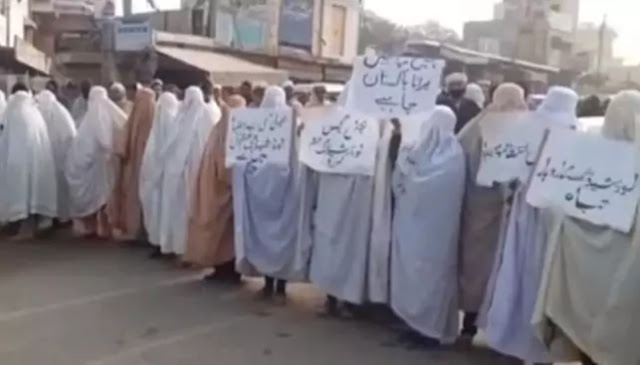 In Lakki Marwat, women’s protest against prolonged load shedding of electricity and gas ended after 7 hours.
After talks with the district administration and heads of relevant departments, the women protesters dispersed.
The burqa-clad woman said, “We have been assured that load shedding will not be carried out out of schedule. After the sit-in ended, the road was reopened, after which traffic resumed.
Meanwhile, Lakki Marwat’s burqa-clad women followed in Imran Khan’s footsteps, burning gas and electricity bills during the sit-in.
The women staged a sit-in protest in Lakki Marwat against 18 hours of electricity and 14 hours of gas load shedding
Burqa-clad women staged a sit-in at Qazi Ashfaq Chowk, chanting slogans and demanding gas and electricity.
The women prayed during the sit-in and protested for seven hours. They also set fire to electricity and gas bills, reminiscent of Imran Khan’s opposition.
Talking to Geo News, the women said that gas and electricity are available only for a few hours, father and brother go to work without breakfast, this injustice should be stopped.
The women said that look at the bill and look at the availability of gas, it is the exact opposite of each other, gas is being given so little and bills are being sent so much.
During the women’s protest sit-in, a traffic jam occurred on the highway and the district administration came for talks but it failed.
After this, joint talks with the concerned departments were assured and it was said that there would be no unannounced load shedding of electricity and gas.
The women ended their protest after this assurance. For the first time in Lakki Marwat, women were seen protesting on the streets like this.