Skip to content
HomeLatest NewsLahore residents face difficulty in breathing due to smog, preparations for artificial rain
Spread the love
Rising humidity and fog in December will increase smog, Khanspur is preparing for an experiment of artificial rain, which will cost an estimated two million rupees. Prof. Munawar Sabir 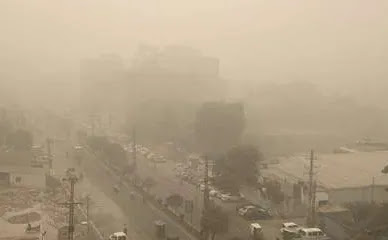 Lahore – Smog Lahore residents are facing difficulty in breathing, in view of which artificial rain is being prepared. According to the details, the air quality index in different areas of Lahore has risen to more than 600 and the city has come first in terms of pollution. Gulberg area of ​​Lahore recorded Air Quality Index 681 while Raiwind recorded Air Quality Index 626.
Anarkali Bazaar recorded 541 while Model Town recorded 532 air quality index. Experts also sounded the alarm, saying that fog and pollution would worsen the weather in December, while the smog spell is likely to last until February. Mercury depletion and rising humidity will pollute the environment with a mixture of fog and pollution.
On the other hand, a statement issued by the Met Office officials said that they are examining the possibility of artificial rain in different parts of the city.
In this regard, renowned Professor Munawar Sabir said that experience of artificial rain in Khanspur which is being prepared. Initially, there will be artificial rain in an area of ​​one kilometer. He said that the cost of artificial rain would be around Rs. 200,000. In case of success of the experiment, artificial rain will be rained on Lahore.
In addition, 4,087 brick kilns across Punjab were inspected, out of which the owners of the kilns causing pollution have been fined more than Rs. 27.4 million. Meanwhile, the Judicial Water Environment Commission Performance Report said that a survey was also conducted on the Air Quality Index in Lahore, according to which the Air Quality Index is higher due to work on construction sites. Construction work is underway at Gulab Devi Underpass, Sheeranwala Gate Flyover, and Shah Kam Underpass.