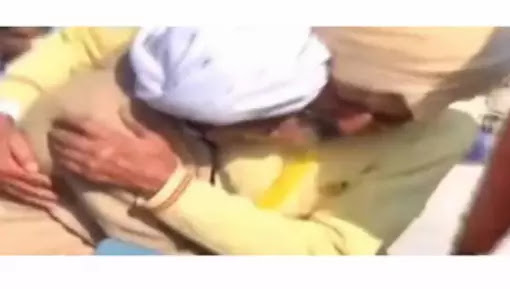 Kartarpur (Monitoring Desk) The Kartarpur Corridor reunites two real brothers who were separated during the formation of Pakistan 74 years later. According to private TV channel 24 News, Siddique, 80, from Faisalabad, Pakistan, went to Kartarpur to meet his brother Habib alias, Sheila. Although the two had split up in infancy, Siddique recognized his brother at first sight.
When the two brothers embraced each other fifty-five years after their childhood, their eyes began to water. This scene made the eyes of all the people there wet. Siddique’s brother Habib is from Pahlewala town in the Ludhiana district of Indian Punjab. The two brothers hugged each other and cried
Later, while talking to the media, Siddique said, “When he was a calf with his mother and brother Habib, Habib was 2 years old at that time. Today, with the help of friends, we have found both brothers. When asked about her mother, Habib said that she had died in 1962. Hearing this, Siddique became obsessed once again