Skip to content
Home Latest News Justice was stifled by dismissal. Direct show cause notice is against law. Dr. Haider Ashraf
Action against honest and competent officers is regrettable. A Government official is an employee of the state and not of political government. Haider Ashraf is a highly educated officer whose professionalism should be used. It is a cruel act. The Prime Minister should take immediate notice of the matter and conduct an impartial inquiry. Senior journalists and analysts express regret. 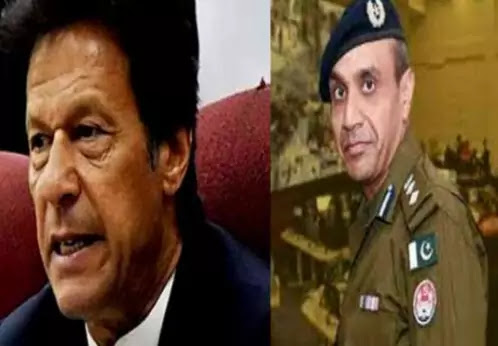 Lahore – Former DIG Lahore Dr. Haider Ashraf has said that his daughter was granted leave abroad for brain surgery, justice has been done. Is in court. An explanatory statement issued by Dr. Haider Ashraf said that I had sought leave abroad for my daughter’s brain surgery, whose brain doctors had prescribed three operations and had gone to Canada after approval of regular leave.

However, I was told to return home within two days. I was told that it was impossible to return within two days due to Corona restrictions. Direct show cause notice was given which is against the law. A personal hearing before the Inquiry Officer is required for the maximum punishment for dismissal.
However, in my case, I have already gone to court to seek justice for the unilateral sentence passed without any inquiry. He said that he is a Phil Bright Scholar. , LLM, Pakistan Police is a Medal-winning officer who has also been nominated for Sitara-e-Imtiaz for his services.
He has served as a district police officer in several districts and was injured twice while performing his duties in the line of duty. Construction of 200 flats for accommodation, new control rooms, hotel monitoring system created.
The transfer of Lahore Police to digital technology made possible the system of 8330, SMS Awareness, Dolphin, Peru, and Anti-Rights Forces while also introducing the Police Tracking System and Police Infrastructure. Remember that former DIG Operations Lahore Dr. Haider Ashraf Was fired for misconduct.
It should be noted that a terrible tragedy took place in Lahore on June 17, 2014, which is remembered as the tragedy of Model Town. Not ready to be a fresh tragedy Model Town from above a strict administrator like Shahbaz Sharif.
All the officers knew that the deployment in Lahore in these circumstances meant giving voice to their grievances but in this tense and tense atmosphere, a police officer took the initiative to handle the matter.
It was Dr. Haider Ashraf who conducted the DIG operation. He took over the post and spent the longest time in Lahore with the toughest Chief Minister like Shahbaz Sharif.
Analysts say that Dr. Haider Ashraf introduced the Dolphin Force, Para force, Police Alert System 8330, Anti-Elite Force, and Police Tracking System in Lahore.
In Lahore, when a particular community’s place of worship was attacked, Haider Ashraf tried to fight the mob on the front foot, making law enforcement possible. In the last ten years of the history of Lahore Police, the crime rate was the lowest in the time of Haider Ashraf while the street crime was controlled in a very amazing way.
He said that a government employee is not an employee of the government but an employee of the state therefore he has to abide by the legal orders of every government but unfortunately as soon as a new government comes to us he starts considering the police officers of the previous government as his enemy. The same thing happened with Ashraf that the government felt that since Haider Ashraf had performed in the time of Shahbaz Sharif, then, of course, they are the companions of Shahbaz Sharif.
Editor Urdu Point Mian Muhammad Nadeem says that NAB has been investigating Dr. Haider Ashraf for the last four years but the matter is not going beyond allegations. In the same case, one officer, former CCP, and Lahore Amin Venus have retired while another officer is still on duty. Dr. Haider Ashraf is still being treated in the same manner as Shahzad Akbar has been treating Nawaz Sharif.
Mian Abid, a senior crime reporter and former secretary of Lahore Press Club, said that Dr. Haider Ashraf went to Canada to do LLM on Phil Bright Scholarship, which was formally approved by the department, instead of honoring the highly educated officer.
He said that during this time his daughter had surgery for which he asked the department for only 20 days extra leave but was told to return to duty in only 48 hours due to Corona flight. It was not available so soon but the authorities, despite knowing the situation, fired a competent officer in one go.
Zahid Gogi said that Dr. Haider Ashraf also served as DP Oshikhupura and arrested the top ten advertisers who were fired in a very popular manner. It was written that Police should not go beyond this board.
No policeman had the courage to cross the boundaries of this board but on the orders of RPO Zulfiqar Cheema, Dr. Haider Ashraf carried out a full operation and committed crimes Dr. Haider Ashraf’s performance as CPO Faisalabad is also on record in which the success rate is significant.
He said that the officer is not employed by any government but by the state. He has to work with the elected government. This is what Dr. Haider Ashraf did. Gone is that sad. Mian Nadeem appealed to Prime Minister Imran Khan to take notice of the matter.
He said that if the senior officers of the civil service and police service were mistreated on the basis of personal preference, then no officer would make the “mistake” of showing good performance. The morale of the force is also declining