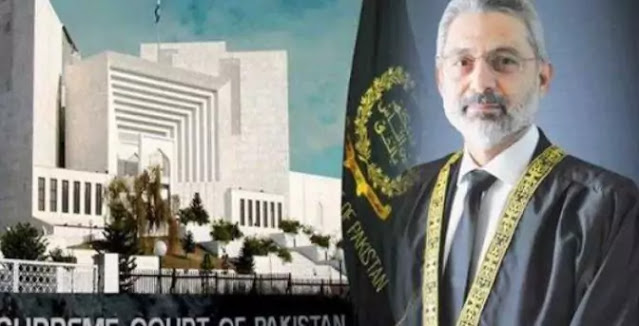 ISLAMABAD – Justice Qazi Faiz Issa has raised questions on the formation of a larger bench in a presidential reference. The letter expressed concern over the formation of a larger bench regarding the interpretation of Article 63A. Justice Faiz Issa wrote in the letter that senior judges were not included in the five-member larger bench.
The non-inclusion of senior judges on the larger bench is against the established rules. Justice Qazi Faiz Issa objected to the appointment of Civil Servant as Registrar and said that in my opinion, the appointment of Registrar is unconstitutional. Think twice before writing a letter.
It may be recalled that the Supreme Court constituted a five-member larger bench headed by Chief Justice Umar Ata Bandial to hear the reference sent by the President for the interpretation of Article 63A of the Constitution.
According to the case list issued by the Supreme Court, the presidential reference hearing will be held on March 24 at 1 pm and the bench will be headed by Chief Justice Omar Ata Bandial. The larger bench comprises Justice Ijaz-ul-Ahsan, Justice Mazhar Alam Khan Mian Khel, Justice Muneeb Akhtar, and Justice Jamal Khan Mandokhel. The Supreme Court will also hear the petition of the bar.
The Supreme Court has issued notices to PTI lawyer Ali Zafar, PPP lawyer Farooq H Naik, PML-N lawyer Makhdoom Ali Khan, and Jamiat Ulema-e-Islam (JUI) Pakistan lawyer Kamran Murtaza. Do it Besides, notices have also been issued to Advocate General Sindh, Inspector General (IG) Police Islamabad, Home Secretary, and President SC Bar. It should be noticed that administration individual
The President had filed a reference in the Supreme Court seeking interpretation of Article 63A of the Constitution for possible disqualification on change of allegiance by the party, in which 4 questions have been raised.