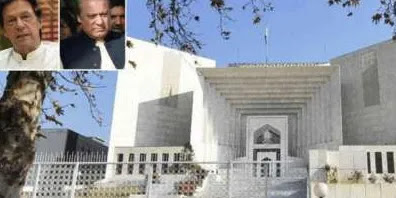 ISLAMABAD – Prime Minister Imran Khan appeared at the request of the Supreme Court of Pakistan in the Army Public School tragedy suicide notecase. A member bench heard the case of the Army Public School tragedy. When Prime Minister Imran Khan appeared at the Supreme Court of Pakistan’s summons in the Army Public School tragedy self-notice case, the Chief Justice said, Prime Minister comes on. I believe in the rule, there is no sacred cow in the country, your order, we will take action.
The Prime Minister said that we had nothing to do with 9/11, we did not know who was a friend and who was enemy, I said at that time this is a war of America, we should not interfere I was martyred I said we should be neutral, we had nothing to do with 9/11, we didn’t know who was a friend and who was enemy.
Justice Qazi Amin inquired that there is no need to go to the past, you are the Prime Minister, we respect you, tell us what steps to take after the tragedy. To which the Prime Minister said that we made a National Action Plan after the tragedy, we won the war because the whole nation stood with the Pakistan Army, we formed the National Intelligence Coordination Committee which is looking into the matter.
The Prime Minister said that when the tragedy took place in 2014, our government was in KP. The evening of the misfortune, we assembled a conference of our party. We had gone to Peshawar on the day of the incident. Imran Khan said that whatever the provincial government could do, the parents say we do not need help from the government. Justice Ijaz-ul-Ahsan said that according to the report no special measures were taken.
The Chief Justice said that the protection of the people is the responsibility of the state in the Constitution of Pakistan. Justice Ijaz-ul-Ahsan said that it was important to reassure the parents. The apex court directed the implementation of the order dated October 20, on which Prime Minister Imran Khan assured the apex court that the requirements of justice would be met.
The Chief Justice of Pakistan said that you are the Prime Minister, you should have the answer, Imran Khan talked to the Chief Justice that one minute, Judge, you stay. Prime Minister Imran Khan said that God gives patience to the parents of children. Ga, what else could we do besides paying compensation, I have met them before, I will still meet them. Justice Qazi Amin remarked that Mr. Prime Minister, we are not a small country, we have the sixth largest army in the world.
He said You have brought the culprits to the table for negotiations. Are we going to sign the surrender document again? Who is responsible for this. On this, the Chief Justice talked to the Prime Minister that it is your job to find out all this, you are the Prime Minister, as the Prime Minister you should have the answer to all these questions.
During the hearing, Justice Qazi Amin said that it would have been better if Nawaz Sharif had resigned from the post of Prime Minister at that time. The Prime Minister said that if the APS family members are sad, then we are also saddened by 80,000 people. You should form a high-level commission of inquiry into the APS issue. The Supreme Court directed the government to take action against the parents of the martyrs of the tragedy APS and take action against those involved in the tragedy. The school adjourned the hearing of the self notice case for 4 weeks