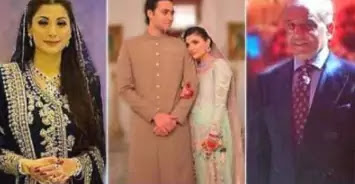 ISLAMABAD – Senior journalist Haroon Rasheed has termed the long marriage of Junaid Safdar, son of PML-N vice president Maryam Nawaz, as a trivial matter.
He said that he was sorry but the Sharif family has shown a lot of leniencies, in a country where there is so much hunger, unemployment, no bread to eat, and there are three-week functions.
And every function costs crores of rupees. Haroon Rasheed has claimed that all these expenses are being borne by the infamous Khokhar brothers, wearing Indian designer clothes.
There is no money for rearing, on the other hand, all this is happening which is not a good thing
It may be recalled that the wedding ceremonies of Maryam Nawaz’s son Junaid Safdar continued with full vigor.
When Junaid Safdar, son of Maryam Nawaz, reached Saif-ur-Rehman Farmhouse from Abbas Afridi’s Margalla Town Farm House on December 14, he was accompanied by Shahbaz Sharif. Junaid Safdar appeared at his party along with PML-N president Shahbaz Sharif.
After arriving at Saif-ur-Rehman’s farmhouse, Shahbaz Sharif also sat on the stage with Junaid Safdar. In the photos and videos, it can be seen that Shahbaz Sharif is also present on the stage wearing traditional kula.
Junaid Safdar chose off-white sherwani and matching turban of Pakistani designer Hassan Shehryar Yaseen (HSY) on the most special occasion of his life.
On the other hand, the bride Ayesha Saif-ur-Rehman wore diamond and emerald jewelry along with Bento Kazmi’s golden dress.
It is to be noted that Junaid Safdar, son of Maryam Nawaz, will be invited to Jatiya Amira on December 17. No leader of any political party has been invited, only close relatives and friends have been invited.
Raed more: Maryam Nawaz’s shoes and clothes are also the focus of attention on her son’s funeral