Skip to content
HomeInternational NewsJoint US-Saudi-Kuwaiti military exercises in Arabian deserts
Spread the love
The exercises, dubbed “Gulf Shooting”, began on November 7 and will continue until November 18, according to a Saudi broadcaster. 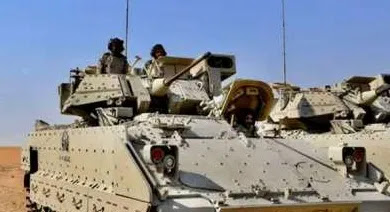 Riyadh – US-Saudi Arabia and Kuwait’s joint military exercises “Gulf Shooting” exercises are underway in Kuwait’s Al-Adaya Complex. These exercises include Royal Saudi Land Forces, Kuwaiti Land Forces and US “Spartan” forces are taking part in exercises, which began on November 7 and will continue until November 18.
According to the Arab Broadcasting Corporation, the Saudi commander of the exercises, Colonel Nayef Al-Otaibi, said that the first phase of “Shooting Gulf 2021 ended with the participation of the Royal Saudi Land Forces the Kuwaiti Land Force and the US Army
He said that the initial objectives of the exercises were to strengthen military ties and joint defense cooperation with friendly countries. Focused on improving compatibility and coherence. He explained that the exercises would strengthen the bonds of defense and military cooperation to achieve the common interests of the participating countries’ armed forces and to strengthen the principles and foundations of cooperation between them.
General Al-Otaibi said that the planning and implementation of the Gulf Shooting Command and Control Procedure, the method of commanding the forces, and the rapid response to emergencies for joint ground operations, as well as implementation. Trained to develop skills. Meanwhile, a pro-Saudi coalition government in Yemen launched airstrikes on Houthi militias in support of government forces on the West Bank, the Saudi broadcaster quoted sources as saying. The damage was done.
The sources confirmed that the areas covered by the coalition aircraft were outside the “Stockholm Agreement.
It is to be noted that the Arab League had released pictures of the operations targeting the Houthi militia and its vehicles in Sarawak and Al-Bayda on Sunday. As a result of these operations, more than 80 Houthis were killed. The Houthis thwarted an attack on Al-Balaq in the west, during which six Houthi military vehicles were destroyed and more than 80 fighters were killed.