Skip to content
HomeLatest NewsJam Owais used to play a lot of violent games on his mobile often intoxicated
Spread the love
Nazim Jokhio was tortured till his death. He may have been tortured even after his death. After the incident, Jam Owais had fled from Karachi and reached Khuzdar. Police officials revealed. 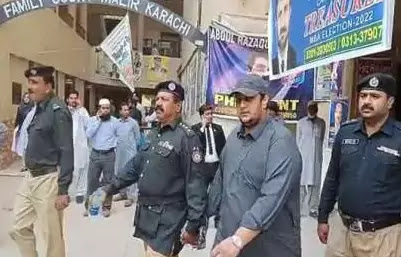 Karachi – important details have come to light regarding the murder of Nazim Jokhio. Police officials made important revelations regarding the murder of Nazim Jokhio, saying that Jam Owais used to play violent games on his mobile phone and was often intoxicated. According to the authorities, Nazim Jokhio was tortured till his death. Nazim Jokiho may have been tortured even after his death.
According to police, Jam Owais had escaped from Karachi and reached Khuzdar. Jam Owais came to Karachi and then presented his arrest. The case against Jam Owais is pure murder. According to the police, the investigation has also been started with the help of mobile data. Police said that Jam Owais was going to frame another charge in the case.
On the other hand, the murder case of Nazim Jokhio has come to light and police officials have recovered the missing DVR of the cameras installed in the jam house as valuable evidence. The VR was missing from the spot which has now been recovered by the police. The said evidence was recovered after the interrogation of the arrested accused.
According to the police, the DVR will help in identifying the accused involved in the incident. The recovered DVR has been sent for forensics. After which the location of Afzal Jokhio, Niaz Salar, Jam Abdul Karim’s mobile phone has also come in Jam Goth. Even 7 days after the murder of Nazim Jokhio, the victim’s mobile phone is still missing.
Audio and video of Nazim Jokhio will be used as the main evidence. The team also visited the scene along with Afzal Jokhio, brother of the slain. ۔ No mobile phone of Nazim Jokhio has been found so far.