Skip to content
HomeLatest NewsIslamabad High Court Request to adjourn the hearing of Avenfield reference case by Maryam Nawaz
Spread the love
The petition has been filed by the lawyer of the PML-N leader. He cannot appear in the Supreme Court on November 24 due to his busy schedule. 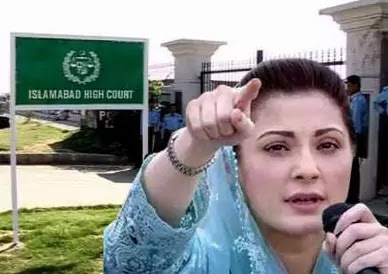 ISLAMABAD – Irfan Qadir, daughter of PML-N’s lifelong leader Nawaz Sharif and lawyer for the party’s vice president Maryam Nawaz, has filed a petition seeking adjournment of the Avenfield reference hearing. Is.
Maryam Nawaz’s lawyer has filed a petition seeking adjournment of the hearing on November 24 on the appeal against the sentence. He asked the court to fix the hearing for another date instead of November 27.
Criticizing the said application, Fawad Chaudhry said that the 16th application for adjournment of the case has been filed by Maryam Nawaz. Fawad Chaudhry says that on the one hand the adjournment and on the other hand the organized propaganda campaign against the courts and the armed forces of Pakistan is going on. Assuming not the Cecilian Mafia, what are these individuals?
It may be recalled that in the Avenfield reference, the accountability court had sentenced Nawaz Sharif to ten years, Maryam Nawaz to seven years, and Captain (retd) Muhammad Safdar to one-year imprisonment and fine. Islamabad High Court has challenged