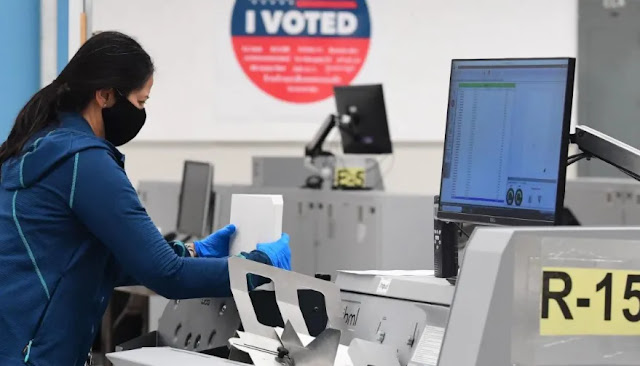 The U.S. Department of Justice has charged two Iranian nationals with participating in a misleading and threatening online campaign aimed at influencing U.S. voters in the 2020 presidential election.
The Justice Department said Muhammad Hussain Musa Kazmi, 24, and Sajjad Kashian, 27, launched a cyber campaign to intimidate, influence, undermine voter confidence and create discord among American voters.
Meanwhile, the US Treasury Department has announced sanctions against three individuals running two different cyber security companies. The two men worked for the same company called Emennet Pasargad. The Treasury Department said the company, formerly known as NetPagard Samawat, had faced sanctions in 2019.
In a statement, Iran said in a statement that “such allegations by the US government are baseless and the United States has a long history of interfering in the affairs of other countries in various forms and forms.” Iranian Foreign Ministry spokesman Saeed Khatibzada said the move was aimed at “deceiving” (American) public opinion.
The U.S. Department of Justice said Kazmi and Kashian allegedly obtained voter intelligence and sent threatening emails. Spreads misinformation to influence Democratic and Republican voters and attempts to hack state voting agency websites
In one case, he sent out massive emails claiming to belong to the far-right “Proud Boys Militia Group” and threatening the American people to change political parties. In another case, they released a video showing a man allegedly hacking into state voters’ websites and making fake ballots.
Both men were not directly linked to the Iranian government in the indictment, but it was noted that their cyber company had worked for the (Iranian) government.
In 2019, the Treasury Department stated that NetPagard Samawat had worked with the Islamic Revolutionary Guard Corps. In addition, in March 2021, US intelligence released a report stating that the Iranian government was behind a multifaceted influence campaign aimed at undermining former President Donald Trump’s chances of winning re-election.
Kazmi and Kashian have been charged in a New York federal court with conspiracy to intimidate, intimidate voters and spread intimidation between states through computer fraud. Kazmi was also accused of computer hacking and computer fraud.
Under U.S. law, various charges carry a maximum sentence of one to 10 years in prison. However, both the accused have pleaded not guilty