Skip to content
HomeLatest NewsIndian Home Minister’s visit to Kashmir How can their friendship be such enmity
Spread the love
Indian Home Minister Amit Shah says that state status will be restored in Kashmir after the elections and that if the internet had not been shut down in the region after August 5, 2019, a large number of Kashmiri youth would have been killed. 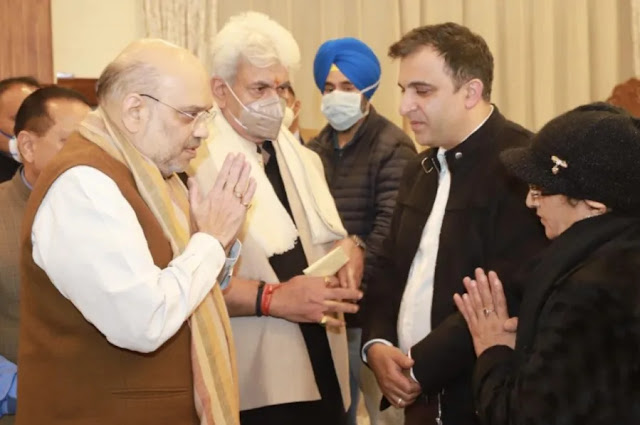 … I have come to befriend Kashmiri youth. Now connect with Modi Ji (Indian Prime Minister Narendra Modi). Connect with the Government of India. And accompany the journey that has begun to take Kashmir forward.
Modiji wants to see peace, stability, and development here. For this, I have come to seek the cooperation of the youth here. Now our government has extended a hand of friendship. Youth clubs are formed. We want the youth here to respond to the misleading forces. We will not allow anyone to disturb the peace of Kashmir.
These are the words of Indian Home Minister Amit Shah, who is on a three-day visit to Indian-administered Kashmir for the first time since August 5, 2019. Political observers say Amit Shah’s visit to Kashmir is significant because his ministry has been managing the disputed region since the end of its special constitutional status.
He says: ‘Amit Shah, who has been the president of the Hindu nationalist party Bhatia Janata Party for many years, not only abolished Kashmir’s special constitutional status on August 5, 2019, but also made it a federally administered territory. Took control of Everything that happens here now happens with their approval.
Amit Shah reviewed the overall situation in Kashmir in a meeting with officials of Indian security agencies and intelligence agencies at Raj Bhavan in Srinagar on Saturday and reviewed the recent situation created by the Kashmir administration through an online event. Addressed members of youth clubs.
Several days before the Indian Home Minister’s visit, Kashmir, especially the capital Srinagar, was turned into a military barracks, with security forces checking vehicles on every road, ‘unjustified’ confiscation of motorbikes and uniforms of passengers and passers-by. Seems busy searching.
However, Inspector General of Kashmir Police Vijay Kumar said that the confiscation of motorcycles and suspension of the internet in some areas had nothing to do with the Home Minister’s visit to Kashmir but these measures were being taken in view of recent killings.
Meanwhile, a young man named Shahid Ijaz was allegedly shot dead by the Central Reserve Police Force (CRPF) in the Shopian district of south Kashmir on Sunday morning.
Kashmir police claimed in a tweet that the youth’s death was the result of an exchange of fire between the militants and the CRPF.

Around 1030 hrs unidentified terrorists attacked a Naka party of 178 Bn, CRPF at Babapora, Shopian. CRPF retaliated the fire and during cross firing one unidentified person got killed. Further details are being ascertained.@JmuKmrPolice @KashmirPolice @DigSkr

The Kashmir administration has set up youth clubs in the name of promoting sports activities in their respective areas, but Amit Shah said in his address that the youth affiliated with these youth clubs would work to eradicate militancy.
So far, 40,000 lives have been lost here. This includes terrorists, security personnel, and civilians. It is impossible for terrorism and development to go hand in hand. The first condition for development is peace. The task of eradicating terrorism is for the 45,000 youth affiliated with the youth clubs here.
How can friendship be enmity?
Political analyst Iftikhar Misgar told The Independent Urdu that if Indian Home Minister Amit Shah had wanted to befriend Kashmiri youth, 300 new youths would not have been imprisoned today and those who are already in jails would have been released. Was done
Their friendship is such that walking on the streets has become difficult. Motorcycles are confiscated without justification. Instead of promoting the people here, the process of demoting is going on.
The Kashmir Administrative Services have been abolished and officers from outside are being posted in each office.
Instead of giving jobs to Kashmiris, they have started evicting them. Every day new laws are being enforced which are affecting the poor people here. Kashmiris are being walled off and the sense of deprivation is growing rapidly.
Iftikhar Misgar said that for the first time in the history of Kashmir, the unemployment rate has reached a record level of 60%.
The Kashmir Chamber of Commerce and Industry says the economic situation here is so bad that by March next year, 30 to 40 percent of commercial units could be closed. Unemployment has reached record levels. If their friendship is like that then what will be the enmity? ‘
Leading analyst and former head of the law department at the Central University of Kashmir, Dr. Sheikh Shaukat Hussain, told The Independent Urdu that there has been no progress or improvement in Kashmir since the end of its special constitutional status.
When the Indian government repealed Article 370, a lot was said about the development of Kashmir. But the reality is that there has been no progress, no improvement in the situation. Dr. Sheikh Shaukat Hussain said that India should adopt a policy similar to that of Afghanistan in Kashmir.
No attempt has been made to address the feeling of deprivation in Kashmir. There is a need for the Indian leadership to reconsider its policy towards Kashmir in the same way that it has changed its policy towards Afghanistan.
A few days ago, the Indian delegation spoke to the Taliban in Moscow. Now if they can talk to the Taliban, who were terrorists to them, then what is wrong with talking to Kashmiri leaders?
The Indian government should try to address the Kashmir issue by recognizing the facts and the sentiments of the people here.
Commenting on the visit of Interior Minister Amit Shah on Saturday, the People’s Democratic Party President and former Chief Minister Mehbooba Mufti said that after the repeal of Article 370, Kashmir has been pushed into a quagmire of crisis.

He added in his series of tweets: Building confidence-building measures, such as the release of prisoners, stopping harassment, economic recovery, etc., can bring relief to the people.
But instead, before the Home Minister’s visit, 700 citizens have been detained under the Public Safety Act and many prisoners have been shifted to jails outside Kashmir. Such a drastic step would only aggravate the situation. Loud claims of normalcy are being made while the ground realities are being ignored.
Kashmir is the heart of India
Indian Home Minister Amit Shah in his address to the youth clubs also said that Kashmir used to be called the crown of India and now it has become the heart of India. He said that as per the promise, after the assembly elections in Kashmir, the state status of the region would be restored.
We will not harm democracy. Elections have to be held. The redistricting of Assembly constituencies is not to be stopped. Now nothing is going to stop in Kashmir. Elections will be held hereafter delimitation and then state status will be restored. I have made this promise in the parliament of the country.
Amit Shah claimed that after August 5, 2019, a new era of peace, development, and stability has begun in Kashmir with the end of militancy, bribery, and nepotism.
While talking to the youth, it occurred to me that the youth of Kashmir, from which news of stoning, terrorism, and violence used to come two and a half years ago, are now talking about development, employment, and benefits. It shows how much has changed. No one can stop this change
Kashmir gets help from the Indian government but the day will come when Kashmir will contribute to India. That is, it will not be a recipient but a giver. Creating such a Kashmir is our goal and purpose.
The Indian Home Minister justified the suspension of curfew and internet services in Kashmir after August 5, 2019, saying that if we did not do so, a large number of Kashmiri youth would be killed.
At the time, there was a conspiracy to provoke emotions. Some foreign powers were also involved in the conspiracy. If we had not imposed a curfew, many old fathers would have buried their young sons
The imposition of curfew saved the lives of the youth of Kashmir. If the internet is shut down, the youth of Kashmir has survived. Today the situation is normal, then everything is open. There is no curfew today. I say for lasting peace you have to suffer a little. Amit Shah said without naming anyone that we will deal severely with those who are disturbing the peace in Kashmir.
No one can stop the current journey of development. This is our commitment. Pakistan has occupied Kashmir in the neighborhood. Make a comparison between this and Pakistan Occupied Kashmir. You will see nothing but poverty and darkness. Even today, food is prepared by burning wood and twigs in the houses. There is only smoke