Skip to content
Home Latest News Indian defense experts and social media users have termed the death of Bipin Rawat as an act of the Indian Army
The death of a far-sighted and visionary military commander in a helicopter crash in India has raised many questions. 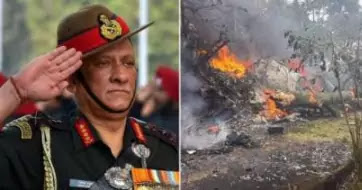 NEW DELHI – With each passing moment, rumors are circulating on social media that Indian Chief of Defense Staff Bipin Rawat has been killed in a mysterious helicopter crash in the Indian state of Tamil Nadu. The differences between the forces may be personal.
According to Kashmir Media Service, former Indian Army DGMO retired Lieutenant General Shankar Prasad, who is also a defense analyst, commented on the death of Bipin Rawat in his blog and wrote that today a far-sighted and insightful military commander of India The death in the helicopter crash has raised many questions.
He said that the Mi-17V5 helicopter of the Indian Air Force is a very reliable helicopter that has been used by India for a long time.
He said that his state-of-the-art technology and excellent security record make him very suitable for the journey of important personalities. In addition, only highly experienced pilots and technicians are hired to operate such helicopters and there is no risk of technical glitches in this helicopter.
Our pilots are capable of operating in all types of weather conditions and the Mi-17V5 is equipped with state-of-the-art avionics,” he said. He said that any VVIP movement is allowed only after weather conditions, operational clearance, air defense clearance, security clearance, and flight information clearance.
Retired Lt. Gen. Shankar Prasad raised the question of whether it was a pilot error, a technical glitch, or something else. Adil Raja, a Twitter handler, while sharing a letter written by Indian Defense Minister Rajnath Singh to Indian Prime Minister Narendra Modi, said that the catastrophe that we have all witnessed is due to human hands and the presence of angry elements in the Indian Army. That war broke out within the Indian establishment after the unwelcome appointment of the Chief of Defense Staff.
According to Rajnath Singh’s letter, the insulting treatment of Indian troops by the Chinese army in the Gulwan Valley was the result of a miscalculation of the situation by Army Chief General Manoj Nirvana and Army Commander XIV Corps Lieutenant General Harinder Singh. Rajnath Singh added that this not only harmed Indian officers and soldiers but also embarrassed India.
The letter revealed that General Bipin Rawat had recommended the removal of both the officers from their posts due to their performance in this case and also in the past. He also referred to a recent statement by General Bipin Rawat in which he said that the Indian Air Force was an auxiliary force and not a self-defense force.
The chief of the Indian Air Force has openly criticized him, saying the air force is a source of power itself. There is a fear that they will be confined to the subordinate force and through this system, they will be brought under the command of the army. The first Chief of Defense Staff was appointed. Just 2 weeks ago, Rawat gave the Air Force and Navy a final deadline to come under theatrical commands.