In the event of a fire, the plaza could collapse at any moment - 10bmnews Skip to content
A private plaza was declared dangerous after a fire broke out in Lahore 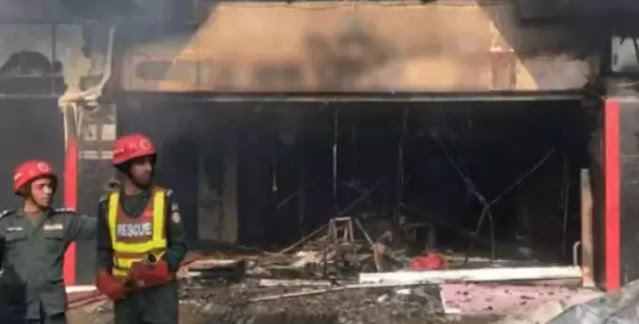 Lahore – After the fire incident in Lahore, the private plaza was declared dangerous, the administration has expressed concern that the plaza could collapse at any time. A fire broke out in the Peace Shopping Plaza in the area last night which engulfed the entire shopping mall as a result of which goods worth crores of rupees in the shops were burnt to ashes.
As soon as the incident was reported, the fire brigade and rescue 1122 teams rushed to the spot and tried their best to extinguish the fire, but the fire was so terrible that it set fire to about 450 shops on all floors of the mall and reduced it to ashes. Gulberg Pace’s anxious shopkeepers watched helplessly as their shops burned.
They also tried to remove goods from their shops but only a few shopkeepers managed to remove some goods from their burning shops.
Solar panels worth Rs. 20 million on the roof of the shopping plaza also caught fire while such compressors and chillers exploded. Now the management has declared the plaza as dangerous. According to the management, the plaza could collapse at any time. Police have registered a case against the plaza management. The shopkeepers said that there was no fire system inside the plaza to put out the fire in case of emergency.
The shopkeepers alleged that the fire was not started but started. Punjab Chief Minister Sardar Usman Bazdar has ordered an inquiry into the incident of fire in Gulberg Plaza. The Chief Minister directed that Commissioner Lahore and DG Rescue 1122 should personally supervise the relief activities