Skip to content
Home Latest News In the case of stripping women naked, the five arrested shopkeepers got great news 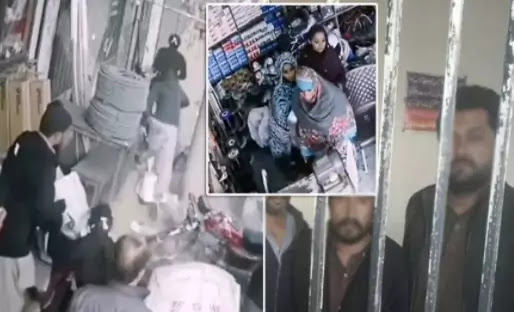 Faisalabad – Five shopkeepers arrested in a case of undressing and torturing women in the Millat Town area have been released from jail after their bail was granted.
A local court in Faisalabad granted bail to the arrested accused Saddam, Yusuf, Faisal, Zaheer, and Faqir Muhammad. Additional Sessions Judge Irfan Haider also ordered to remove section 354A from the case. The shopkeepers were released from the district jail after getting bail from the court.
Talking after the release, the shopkeepers said that they were innocent as evidenced by the leaked CCTV footage. These women came to steal, another group is also working behind them, there was a lot of damage in two months, let us get justice
It may be recalled that some time ago, there was a commotion in the Millat Town area of ​​Faisalabad when videos of clashes between shopkeepers and some women came to light. It was asserted that the retailers had tormented the ladies by stripping them bare.
However, when the CCTV footage of the incident came to light, the whole truth was revealed and it was proved that the women tore their own clothes so that their theft could be concealed.