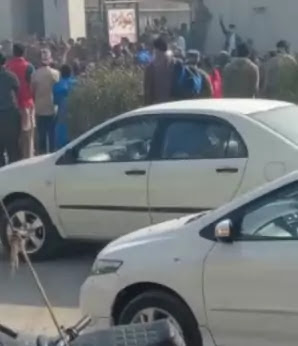 Sialkot – A mob on Wazirabad Road accused of blasphemy killed a Sri Lankan citizen and an export manager of a Rajko factory and set his body on fire. Punjab Chief Minister took notice of the incident. Posted in
Sialkot Police District Officer Omar Saeed Malik said the victim was identified as Priyantha Kumara. Videos shared on social media showed that hundreds of youths were present at the scene.
Punjab Chief Minister Usman Bazdar termed the incident as extremely painful and demanded a report from the IG police. He directed that all aspects of the incident are investigated and action be taken against those who took the law into their own hands. The spokesman said details would be shared with the media after a preliminary investigation