Skip to content
HomeLatest NewsIn Lahore, son-in-law killed father-in-law and 2-year-old
Spread the love
The slain Hamid Shah and his son Farrukh Shah returned home from the USA ten days ago while Shah Rukh also returned home from Turkey three days ago after completing his studies. 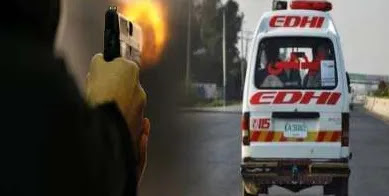 Lahore – A horrific incident of triple murder has taken place in Lahore. Son-in-law has shot dead his father-in-law and two years old. The incident took place where an accused named Shahzeb opened fire on his father-in-law Hamid Shah, relatives Farrukh Shah and Shah Rukh. As a result of the firing, Hamid Shah and his son Farrukh Shah died on the spot while Shah Rukh was rushed to hospital where he succumbed to his injuries.
According to the police, Mills Shahzeb’s wife had come to her parent’s house in a rage. The accused went to her father-in-law and opened fire on her. That Shah Rukh also returned home from Turkey three days ago after completing his studies. Police are gathering evidence from the scene and have launched an operation to nab the accused.
In Jhang, on the other hand, a man killed his own family members with an ax during a domestic dispute. In Jhang, a man allegedly killed his parents and sister with an ax during a domestic dispute. Given Upon receiving the report of the incident, the police reached the spot. Police say the accused fled after the incident and efforts are being made to arrest him.
According to the police, the investigation is being carried out on other members of the family of the accused while the bodies have been taken into custody and the procedure has been started. However, the cause of the murder will come to light only after the arrest of the accused. It should be noted that the number of murders based on domestic disputes is increasing day by day. Last month in Shar-e-Quaid, an unfortunate and ruthless son tortured and killed his own frail father while seriously injuring his mother.