Skip to content
HomeLatest NewsImran Khan’s services in combating Islamophobia and protecting the honor of the Holy Prophet are extraordinary
Imran Khan is the first Muslim leader to suggest a workable solution to the problems facing the unity of the Ummah, especially the Muslim Ummah. Khan announces support 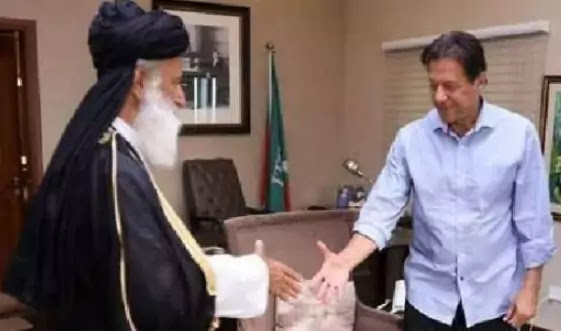 Islamabad – Maulana Fazlur Rehman’s old colleague Maulana Sherani’s announcement of support for Imran Khan, said that the conscientious and nation-selling group, not the leader dedicated to the Prophet.
According to details, a former associate of Jamiat Ulema-e-Islami chief Maulana Fazlur Rehman and head of Jamiat Ulema-e-Islam Sherani group Maulana Sherani had a special meeting with former Prime Minister Imran Khan in Bani Gala on Friday.
During the meeting, Maulana Sherani assured full support to Imran Khan. Former Speaker of National Assembly Asad Qaiser and Shahbaz Gul was also present on the occasion.
According to ARY News, during the meeting, Maulana Sherani appreciated Imran Khan’s efforts to fight Islamophobia and safeguard Pakistan’s independence and sovereignty. Services are exceptional.
He said that he valued Imran Khan’s vision of the state of Madinah and its efforts for its establishment. Imran Khan is the first Muslim leader to suggest a workable solution to the problems facing the unity of the Ummah, especially the Muslim Ummah. Maulana Sherani said that imperialism has always conspired against those who raise the flag of freedom and self-determination. Will do their part
On the occasion, former Prime Minister Imran Khan thanked Maulana Sherani and said that he welcomed the goodwill of Maulana Sherani. He said that the protection of values ​​and national independence and sovereignty is more important than power. Perform the duty of protecting the nation