Skip to content
Home Latest News Imran Khan’s reaction to the incident that took place with the government delegation in Masjid Nabavi
I can never imagine instructing the people to raise their voices in this holy place. What happened in Madinah is the result of their deeds and the reaction of the people. Former Prime Minister’s Statement 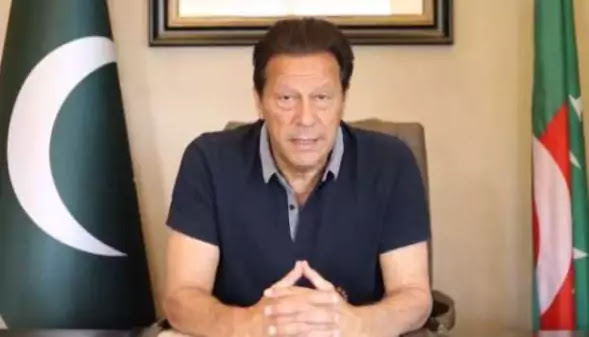 Islamabad – Imran Khan’s reaction to the incident that occurred with the government delegation in the Prophet’s Mosque. According to details, former Prime Minister Imran Khan has said that he could never think of instructing people to raise their voices in this holy place. Can’t even, when this incident took place in Madinah, our workers were praying at night.
I raised my voice against Islamophobia all over the world. They became part of an external conspiracy to overthrow the government.
Under the conspiracy, the NRO was overthrown and the most corrupt people were imposed What happened is the result of their actions and the reaction of the people because never before in the history of the country have the people come out like this and no one is doing it but the people are getting out of trouble and there is anger among the people.
It may be recalled that people chanted slogans when they saw Prime Minister Shahbaz Sharif and the government delegation in Masjid-e-Nabawi. Kept According to ARY News, the sanctity and respect of Masjid-e-Nabawi were not taken into consideration during this time.
When Prime Minister Shahbaz Sharif and the government delegation reached Masjid-e-Nabawi, people chanted slogans. People chanted slogans of thieves, Prime Minister Shahbaz Sharif’s car was surrounded by people, and Shah Zain Bugti and Maryam Aurangzeb were also surrounded by guards.
Information and Broadcasting Minister Maryam Aurangzeb said that this is the destruction of the society, I do not want to name this person on this holy land, I do not want to use this holy land for politics. On the face of it, there are many sections and sections of the society who are maintaining these traditions, it will take time but these attitudes will change with our positive attitudes, our workers are also here but they were instructed not to have such attitudes. Be adopted