Skip to content
HomeLatest NewsImran Khan’s fate will be like that of fugitive General Musharraf Bilawal Bhutto
I challenge Zardari, Asifa, or me to arrest and show that giving certificates to ten ministers shows that the majority minister is not trusted, allies are also changing their minds. Addressing a meeting in Multan 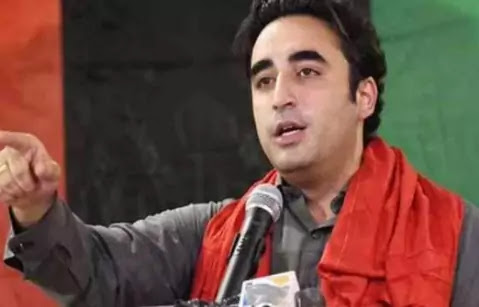 Multan – Chairman Pakistan Peoples Party Bilawal Bhutto Zardari has said that Imran Khan’s writ petition regarding corruption has lost its credibility just like its leader General Musharraf who is a traitor and fugitive. Have lost credibility. Imran Khan’s fate will be the same as General Musharraf’s. Chairman Bilawal Bhutto challenged Imran Khan that President Zardari himself and Asifa Bhutto Zardari are present in Pakistan and if Imran Khan has the guts then show him by arresting him.
He said that Quaid-e-Awam, Shaheed Mohtarma Benazir Bhutto, and President Zardari have been honorably acquitted of all fake cases of corruption. Chairman Bilawal Bhutto said this while addressing a party workers convention in Multan on Thursday. In his address, he said that Imran Khan had done a great injustice to Multan by not giving a certificate of performance to his foreign minister.
Imran Khan has distributed certificates to his spoons today. On the one hand, the government claims its successful foreign policy and successful visit to China and on the other hand, it does not give a certificate to its foreign minister. Chairman Bilawal said that the CEC of the party has declared war against this incompetent, selected and puppet government, and every worker of the party is a soldier of this war.
The party staged protests across the country on all issues including petrol, gas, sugar, and fertilizer crises. The PPP also organized a farmers’ march and a tractor march to raise voices for the rights of farmers who provide food security to the country. He said that our march would leave Karachi for Islamabad on February 27 and Imran would have to respond to the grievances of the people.
We will not allow this selected person to cause further hardship to the people. We will contact anyone who has ever chanted the slogan of Jai Bhutto and persuade them to support the people of Pakistan and the party. He directed the party workers to take the message to the old workers and supporters that the son of Shaheed Benazir Bhutto has come out to change the fate of their country and save the country.
We will expose this incompetent, selected puppet in front of the people of Pakistan. Bilawal Bhutto Zardari said that our long march will pass through the whole country and we will inform the people that Transparency International has declared this elected government as the most corrupt government in the history of Pakistan. Every corrupt person in Pakistan is sitting to the right and left of Imran Khan.
Today, Imran Khan gave certificates to some of his ministers, including the minister who stopped the C-Pack project, the minister who promised to create a province, and the minister who was earlier a minister. He has been removed from the post and is now the Minister of Planning, creating a crisis of sugar, gas, petrol, medicine, etc.
He said that Imran’s cabinet has a lot of ministers while he gave certificates to ten ministers which showed that Imran did not trust the majority of the ministers in his cabinet. The people are carrying the burden of this incompetent cabinet but now it is over and Imran will have to go with his cabinet. The PPP chairman said that the success of the long march was already showing.
A friend of Imran has been disqualified from parliament and government allies are also preparing to change their minds about the government. We will also go through the constituencies of these allies and tell them the decision of the people that Imran has to go.
We will tell all Imran’s facilitators on the way to Islamabad that this government has failed and when we reach Islamabad the world will see who is with Imran Khan and who is not.