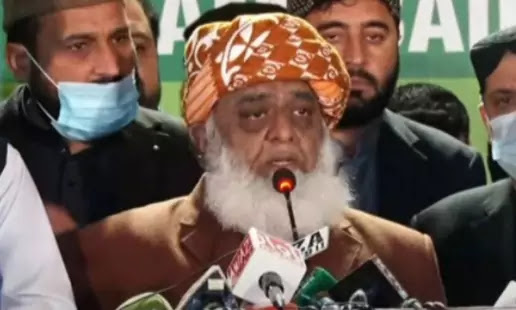 ISLAMABAD – Pakistan Democratic Movement (PDM) chief Maulana Fazlur Rehman has said that Imran Khan’s entire family and the party are corrupt.
Talking to media after the PDM summit, he said that Imran Khan has been found guilty in the case of the nation, those who concealed 22 accounts are being given protection. Where is Imran Khan honest and trustworthy? A failed system is upon us. We are not accepting the presidential style of government in any way. The sovereignty of the SBP is being abolished under the new bill.
Maulana Fazlur Rehman said that every politician was called a thief. It is not enough to evict junior government employees on Murree tragedy. The agreement should be made public.
In response to a question, he said that the parade is held from morning till noon. We have to enter Islamabad on March 23 afternoon. There is a fertilizer crisis in the country. Farmers will also participate in the long march. There will be an expansion walk on March 23. On March 23, people from all corners of the country will turn to Islamabad. Direct