Skip to content
HomeLatest NewsImran Khan has been suffering from Sharif family phobia for 8 years Maryam Aurangzeb
Spread the love
The fire of political revenge has not been extinguished in Imran Khan’s heart and mind. The Prime Minister thinks that he is still standing on the container. Statement of PML-N spokesperson 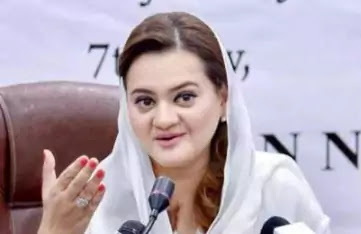 ISLAMABAD – Pakistan Muslim League-Nawaz (PML-N) spokesperson Maryam Aurangzeb has said that Imran Khan has been suffering from Sharif family phobia for eight years now.
Remained According to details, in a statement, he said that the Prime Minister thinks that he is still standing on the container today. He did likewise in his meeting yesterday. Foreign ministers and delegations were coming to the country and they were talking about the Sharif family Were
Maryam Aurangzeb said that Imran Khan made the country bankrupt, Imran Khan made every plan of Nawaz Sharif controversial. No one has said anything in 3 years, the doors of NAB are also closed for investigation against them, therefore they are not questioned on Billion Tree Tsunami, Foreign Funding Case, BRT project.
It is believed that in his interview with foreign TV, Prime Minister Imran Khan had said that action should be taken against corrupt elements even if they belong to my party. Bhutto and Sharif’s families are responsible for the misery of Pakistan.
Wealth comes from two families, it is difficult for a third party to come under the rule of two corrupt parties, any country is poor because its leadership is corrupt, Bhutto and Sharif’s families are responsible for Pakistan’s misery and problems. Yes, we are competing with two families who are rich, both families misusing resources.
He said that when two corrupt parties rule in the country, it becomes difficult for the third party to come despite the struggle. We want to make the country prosperous and establish a rule of law.
The government took action on the Chinese scandal. Why should action be taken from my own party, if allegations of corruption against ministers come to light, I will conduct a transparent investigation myself