Skip to content
HomeLatest NewsImran Khan gets hurt a lot when something is said against his wife
Spread the love
Senior anchor Mansoor Ali Khan gave details of the conversation with the Special Assistant regarding Bushra Bibi. 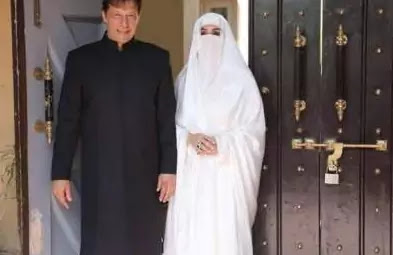 ISLAMABAD – Senior journalist Mansoor Ali Khan says that Shahbaz Gul has told me that when something is said against the wife of Prime Minister Imran Khan, he is sad. Criticism and accusations against women are now becoming commonplace. Talking about this, senior anchor Mansoor Ali Khan said that such language is used against the Prime Minister’s wife from different angles, through the back door. Which is unbearable.
In this regard, I spoke to Shahbaz Gul, Special Assistant to the Prime Minister. He said that Imran Khan is hurt by what is said about Bushra Bibi. If someone criticizes or speaks wrongly, as your friend, we will not be able to hear such a thing about Bhabhi and we will get angry.
For us too, Bushra Bibi has such a status and we know that Imran Khan is hurt by such things. Imran Khan has such a relationship with his wife that when something is said about him, he is sad and We don’t like it either, that’s why we give such a reaction. Mansoor Ali Khan further said, “See it in the video.” Daughter and a mother, the first lady is repeatedly criticized, think! How will their children feel when the first lady is talked about? If there is any disagreement with Imran Khan, criticize him.
He said in a press conference that for the last 3 to 4 months, an attempt has been made to launch a campaign. It is very important to talk about the issue of moral decay. The first lady is repeatedly attacked, said Ms. Kulsoom Nawaz. There has never been any talk about the caste of Imran Khan. You look good or bad. You do politics. The first lady is repeatedly criticized. Before becoming the wife of the first lady Imran Khan, she is the daughter of this nation and a mother. Think about how their children will feel when they talk