Skip to content
HomeLatest NewsGunmen attack farmers over land dispute in Kachhi
Spread the love
Gunmen were instructed by a man to open fire on farmers working in the fields and they started firing indiscriminately. 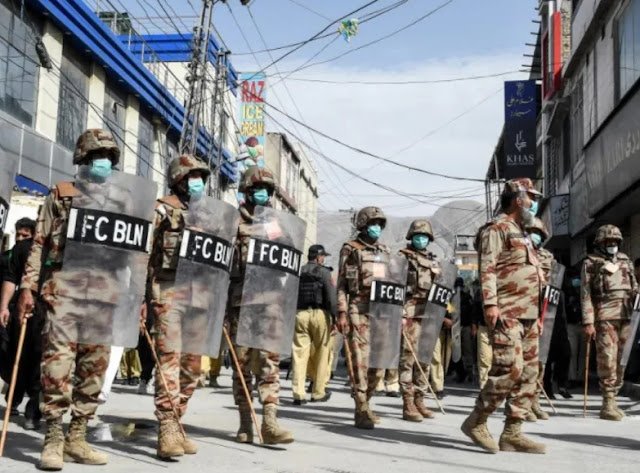 November 12 was a normal day. When Bachal and his son went to work in their field as usual and they were mowing the lawn, five vehicles stopped and armed men got out and came forward.
Gunmen were instructed by a man to open fire on farmers working in the fields and they started firing indiscriminately.
The farmers did not even get a chance to save their lives and three persons were killed and two others were injured in the firing. The gunmen returned to their vehicles after the shooting. The incident took place in the Balanari area of ​​the Kachhi district of Balochistan. The relatives of the farmers protested against the incident by blocking the national highway along with the bodies.
Regarding the incident, Sardar Yar Muhammad Rind, chief of the Rind tribe and member of the provincial assembly, while holding a press conference in Quetta recently, demanded from the Chief Justice of Balochistan to conduct a judicial inquiry into the incident.
Sardar Yar Mohammad Rind said that the victims had come to Quetta before the incident and expressed their concerns in a press conference. The same thing happened to them that threatened them. He demanded from Chief Minister Mir Abdul Qaddos Bizenjo to arrest the accused and bring justice to the victims.
Meanwhile, a case of the incident has been registered in Levies Police Station Bala Nari, in which the plaintiff Ghulam Muhammad gave details about the incident. Ghulam Muhammad told Levies that on November 12, he and his cousin went to work on their land.
Meanwhile, around four o’clock in the afternoon, they were mowing the lawn when five vehicles came and stopped. Armed men came out and opened fire on the farmers working on the land, killing three and injuring two. Ghulam Muhammad saved his life by hiding behind a fence. He also told Levies the names of the gunmen, on whom the case has been registered.
Awan tribe in Kachhi
Leading writer and scholar Abid Mir, referring to the presence of Awan tribes in Kachhi, said that Kachhi has a majority of Sindhi and Seraiki speaking Jamot tribes along with Balochi. This is an ancient population and these tribes have been in harmony with each other for centuries. Tribal battles between them have been going on since the days of feudalism.
After the formation of the Baloch state, the lands here were occupied by the Baloch tribes. The majority of the Jamot tribes are farmers.
The Awan also live here, and both of these tribes speak Seraiki. Abid said that these people were brought here during the British rule and settled here from Indian and present Pakistani Punjab. Over the course of a century, these are the people who have settled here.
He further says that the upper area of ​​Kachhi is called Bala Nari, there are lands of different parts of ancient tribes. There are small and large landowners and farmers who have settled this land for generations. Each town is called a ‘city’ after the name of the tribe concerned. The city of Haji is the largest and most ancient city among them. Surrounding it are other ancient settlements.
From here onwards there is a town named Ramji towards Dosa. It has an ancient population of Awans. The locals also call it the city of Awandin. The lands here have been owned by the Dinarzai (a branch of the Bangalzai tribe) tribes since ancient times and the Awan are herdsmen of the ancestral backyards.
How did the controversy arise?
Ghulam Muhammad, a cousin of the slain, told The Independent Urdu that a land dispute was going on with the Dinarzai people, who are claimants of the land. Our case is pending in the courts. The Dinarzai tribe sold the land to Asim Kurd Gilo without informing us, which we did not know about for three years,” he said. Now Asim Kurd Gallo has come and is calling himself Malik, who cannot become Malik in principle
He said that even on the day of the incident, Asim Kurd Gallo had come with his bodyguards, who opened fire and killed one of my cousins, Muhammad Fazal, Sachal, and Soomro.
Two harmed are being treated at the medical clinic. According to Ghulam Muhammad: This land belongs to them and they have been living here for centuries. If there is an owner, bring proof with them. He said that a case has been registered but no arrest has been made so far
What do Levies say?
Niaz Mohammad, deputy tehsildar of Levies Balanari police station, said that a case has been registered against the murder of three persons and raids are being carried out to arrest the accused.
Niaz Mohammad said that the incident took place on November 12 in the Mouza Awan area of ​​Balanari where armed men opened fire on farmers. Three individuals from a similar family were killed and two others were harmed.
He said that eyewitnesses have stated that the number of accused is seven to eight, some of whom belong to different areas of the Kachhi district. The search is on for the nominees. Niaz Mohammad admitted that the nominees in the case are influential.
There are difficulties in arrest, but the search for them continues in Kachhi. For those who are out of the district, the police of other cities are being contacted.
According to the Naib Tehsildar: The land dispute of the victims has been going on for a long time. This is not the first time such an incident has taken place.
Historian and author Abid Mir say such disputes are common in the Kachhi district. So there is not a single strong chief or feudal lord, most of whose lands are held by the Jamot tribes or by the Brahui-speaking Baloch tribes.