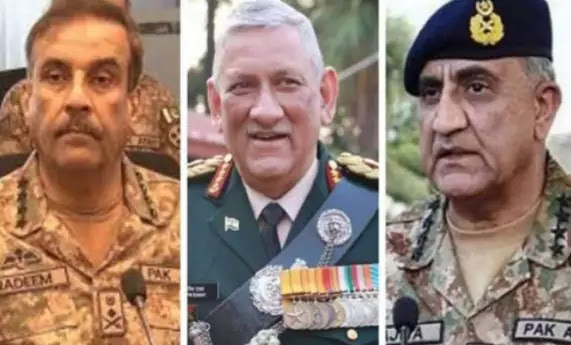 Rawalpindi – Pakistan’s Chairman Joint Chiefs of Staff Committee and Army Chief have expressed sorrow over the death of India’s Chief of Defense Staff (CDS) General Bipin Rawat.
According to Pakistan Army Public Relations (ISPR), Chairman Joint Chiefs of Staff Committee General Nadeem Raza and Army Chief General Qamar Javed Bajwa along with Indian CDS General Bipin Rawat and his wife were killed in a tragic helicopter crash. Expressed regret over the loss of human lives.
It may be recalled that General Bipin Rawat along with his wife and staff were on their way from New Delhi to give a lecture in the state of Tamil Nadu when their helicopter crashed on the way. The crash killed 13 people, including General Bipin Rawat and his wife, and injured one