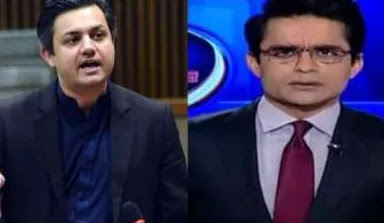 ISLAMABAD – Federal Minister Hamad Azhar has challenged private TV channel Geo News program anchor Shahzeb Khanzada for a debate. According to details, in his message on the microblogging website Twitter, Federal Minister Hamad Azhar said that he would challenge Shahzeb Khanzada to discuss the issue of LNG gas.
He asked me to discuss the issue of LNG and gas with an independent anchor and independent experts and free the public instead of constantly interrupting/interfering, voice control, and reading pre-made scripts on teleprompters. Give them a chance to listen and decide

I would like to challenge Shahzeb Khanzada to debate LNG and Gas issues with me moderated by a neutral anchor and with Independent experts. Let the ppl see the facts without persistent interrupting, volume controls, teleprompters etc.

It may be recalled that Shahzeb Khanzada, a journalist and anchor of private TV channel Geo News while talking in his program, had said that Hamad Azhar had promised to appear in the program on the issue of the gas crisis in winter but was called five times. Despite not coming. After which the host of the program Shahzeb Khanzada raised 5 questions based on government reports and facts.
Explaining his five questions to the government, Shahzeb Khanzada said that according to the NEPRA report, not using LNG terminals as per their capacity, delayed tender, gas pipeline, and work on the new terminal has not started yet. Take energy. It is pertinent to mention here that the gas crisis has intensified across the country in which the possibility of further escalation is also being shown.
In view of this possibility, the government has decided to provide LNG to the consumers of Punjab. In this regard, sources in the Petroleum Division said that LNG would have to be provided to domestic consumers in Punjab in winter. The supply of LNG has been estimated at Rs 92 billion. Sources said that LNG worth Rs 26.86 billion will have to be provided to domestic consumers in December this year, Rs 42.27 billion in January, and Rs 22.90 billion in February.